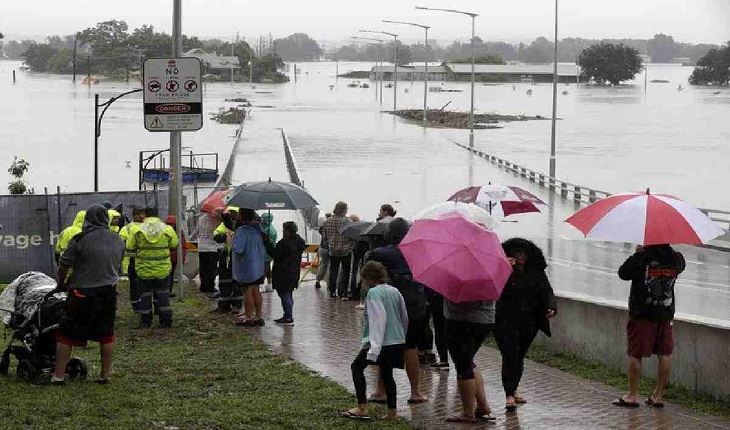 Tens of thousands of residents have been evacuated in a major flooding event on Australia's east coast, with heavy rainfall across large parts of New South Wales (NSW) state expected to continue.

Across the state, 38 regions were designated as natural disaster areas, with state Premier Gladys Berejiklian warning that further evacuations were expected as sustained heavy rainfall continued.

"I don't know any time in our states' history when we've had these extreme weather conditions in such quick succession in the middle of a pandemic."

Some areas on the NSW mid-north coast have received over 1 meter of rain fall since Friday, with one data center north of Sydney recording 249 mm in just 24 hours on Sunday.

"This is due to the combination of a slow moving coastal trough and the approach of another system coming through from the west," Bureau of Meteorology NSW manager Jane Golding explained.

A severe weather warning was extended on Monday to include the south coast and western districts of NSW, on top of the central and mid-north coast.

"With the approach of this new system coming through today, we're expecting heavy rain to fall in areas that haven't seen as much rain over the last few days and we're expecting the flood risk to develop in those areas as well," Golding said.

National Flood Services Manager at the BoM Justin Robinson described the situation as the worst he had seen in 20 years as a flood forecaster.

"This is a statewide flood event. We've got a flood-watch that covers all the way from the Queensland border down to the Victorian border, all of those coastal rivers," Robinson said.

"So we're expecting this rainfall in the coming days to cause flooding in those rivers, renewed flooding in many of those communities that have already been impacted by flooding over the last couple of days."

"Our first concern is for the safety and needs of those directly affected, particularly those whose homes have been inundated by floodwaters," NSW Minister for Emergency Management David Littleproud said.