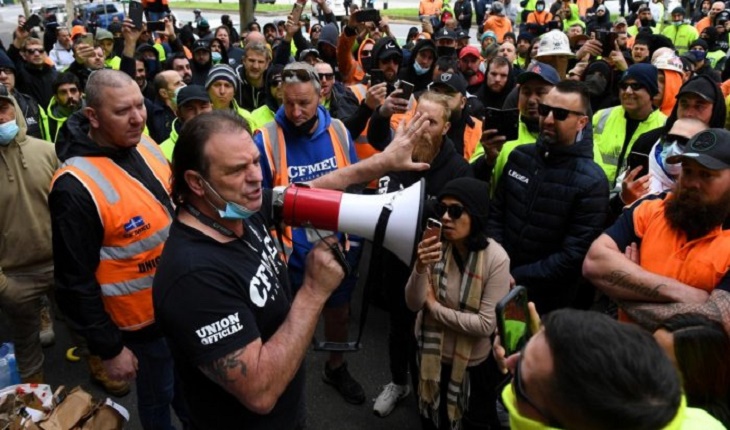 Sites will be closed for two weeks, in what authorities described as a response to "widespread non-compliance" with Covid-19 regulations and violent protests.

More than 100 construction workers in high-visibility vests brawled and smashed union office windows in central Melbourne on Monday, voicing their anger at the vaccine requirement.

Melbourne has been in strict lockdown for seven weeks, as authorities struggle to contain an outbreak of the fast-spreading Delta variant.

Several clusters have been linked to construction sites, where Covid containment measures are said to be lax.

"We've been clear: if you don't follow the rules, we won't hesitate to take action," said state minister for industrial relations Tim Pallas, announcing the shutdown.

"We put the industry on notice just a week ago, we have seen appalling behavior on-site and on our streets, and now we're acting decisively and without hesitation," he said.

The closure of construction sites leaves tens of thousands of people out of work, and further protests are expected Tuesday.

"Those drunken fascist un-Australian morons are the reason construction workers will be sitting at home and not getting paid for the next two weeks," he said.

The state of Victoria recorded 603 new Covid cases in the past 24 hours.

France accuses Australia, US of 'lying' in escalating crisis over submarines