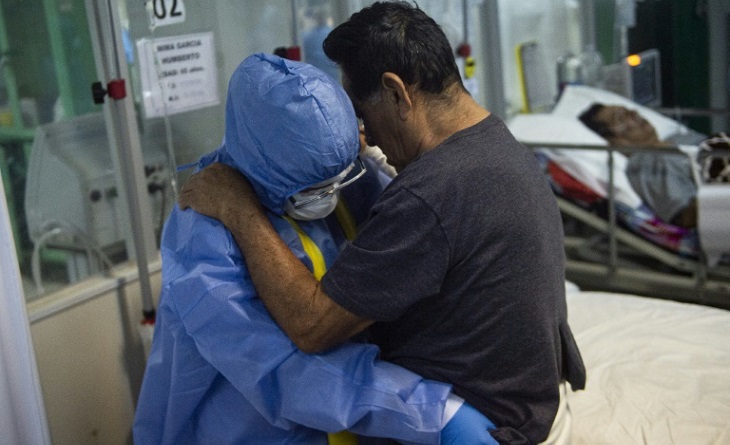 In this file photo taken on October 19, 2021, a health professional assists a COVID-19 patient at a hospital in northern Peru | Photo: Bangkokpost

Peru, which has the world's highest Covid-19 death rate per capita, has surpassed 200,000 deaths from the coronavirus, the health ministry said on Friday.

The ministry announced 25 new deaths over the previous 24 hours, taking the South American country over the symbolic threshold with 200.003 deaths since the pandemic started in March 2020.

The Andean country of 33 million has also recorded 2.2 million infections.

With 6,065 deaths per million population, Peru's Covid mortality rate is the highest in the world, according to an AFP count based on official data.

The news comes at a time of falling daily cases and deaths attributed to the increase in vaccinations, although authorities remain worried about a potential new wave of infections due to the Delta variant that is now predominant in the country.

"It is probable that the first and second waves have generated immunity in part of the population, as has vaccination."

The fall in infections has allowed the government to relax some healthcare measures and reactivate parts of the economy.

The nighttime curfew has been reduced to just two hours while restaurants are now allowed to operate at full capacity.

Peru's number of deaths is only surpassed in Latin America by Brazil and Mexico, although those countries' populations are almost seven and four times greater respectively.

Before the pandemic, Peru enjoyed one of the most dynamic economies in the region but in 2020 GDP fell by 11 percent and more than 2.1 million people lost their jobs as Peru entered recession.

"We need to get vaccinated so there is no more sadness in homes and no more orphans," Mirtha Garcia Espinoza, a 39-year-old mother of two widowed by the pandemic, told AFP.

Peru's virus death rate has been falling since April when it reached 2,500 a week.

Last week that was down to 169, according to official figures.

The government hopes to vaccinate 70 percent of its population over 12 by the end of the year.

More than 14.2 million people have so far received both vaccination doses, accounting for 51 percent of those aged over 12.