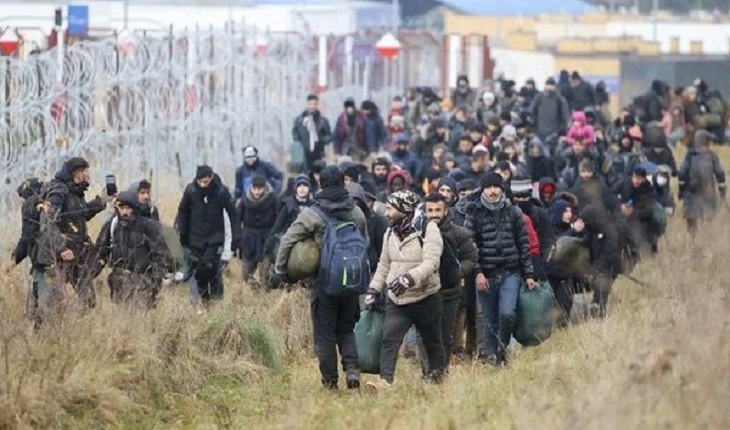 The European Union said Friday it was making progress on tackling a migrant crisis on the Belarus-Poland border but tensions remained high with hundreds trapped in a no-man's land.

After Poland sent thousands of troops to the area, Belarus said Friday it would "respond harshly to any attacks" and held joint drills with Russian paratroopers near the border.

Two Russian soldiers died during the snap exercises when their parachutes malfunctioned in strong winds, the defence ministry in Moscow said.

The West accuses Belarusian strongman Alexander Lukashenko of luring thousands of migrants from the Middle East to his country to send across the border into the EU in revenge for sanctions.

Polish border guards put the number of migrants on the border at between 3,000 and 4,000, with more arriving every day.

The migrants, mainly Kurds from the Middle East, have been stuck for days on the border in near-freezing temperatures.

President Joe Biden on Friday expressed "great concern" over the crisis, adding that the United States had communicated its position to both Russia and Belarus.

Steps were being taken to stem the flow of migrants, with Ankara saying that Iraqis, Syrians and Yemenis would no longer be allowed on flights from Turkey to Belarus.

Iraq said it was drawing up lists of its citizens blocked on the border who wanted to go home and was ready to organise repatriation trips. It had also closed Belarusian diplomatic missions that had been providing Iraqis with tourist visas.

"We are seeing progress on all fronts," European Commission vice president Margaritis Schinas told a press conference in Lebanon, adding that he would
soon be travelling to Iraq and Turkey.

- Warning to 'hotheads' -
A German foreign ministry spokeswoman said talks were continuing with airlines and countries along possible migrant routes, and that the Turkish ban showed "we already have some success".

Amid reports this week of more flights from Turkey and the Middle East carrying migrants to Minsk, Western countries are demanding Lukashenko and his main ally Russia take steps to end the crisis.

Paris urged top visiting Russian ministers to use Moscow's links with Lukashenko to resolve the standoff.

The US and European delegations at a UN Security Council meeting on Thursday accused Minsk of endangering lives for political purposes and trying to divert attention "from its own increasing human rights violations".

Minsk and Moscow have accused EU countries of failing to live up to international standards by blocking the migrants, who they say are seeking shelter after Western military "adventures" in the Middle East.

As well as joint paratroop drills, Russia's military show of support for Minsk this week has included strategic bombers patrolling over Belarus.

"We'd like to warn hotheads against overestimating their capabilities," he said, stressing Russia was ready to help ensure Belarus's security.

Tensions are already high between Moscow and the West over Ukraine, with US and EU leaders in recent days raising concerns over reported Russian troops movements near the Ukrainian border.

Moscow has rejected any claims it is involved in the Belarus migrant crisis, with President Vladimir Putin telling Europe it should "restore contacts" with Minsk if it wants a resolution.

The EU is instead considering new measures against Lukashenko, who is already under sanctions for a severe crackdown on opponents after a disputed presidential election last year.

- Kremlin vows no gas cut -
The Belarusian leader, who has ruled the ex-Soviet country for nearly 30 years, suggested Belarus could cut off a gas pipeline to Europe in response.

The Kremlin dismissed the threat on Friday, saying Russia's reliability as a gas supplier "is beyond question".

Poland has moved 15,000 troops to the Belarus border, put up a fence topped with barbed wire and approved the construction of a wall.

Migrants have been trying to cross the border for months but the crisis came to a head when hundreds made a concerted effort on Monday and were pushed back by Polish border guards.

They set up a camp on the border where many are sheltering in tents and burning wood from local forests to keep warm.

At least 10 migrants have died on the border in recent months, seven of them on the Polish side, according to Polish newspaper Gazeta Wyborcza.

It is unclear how many migrants are now in Belarus but thousands have crossed or attempted to cross from the country into the eastern EU states of Latvia, Lithuania and Poland since the summer.

WHO Europe director Hans Klug said he was "very concerned about the thousands of vulnerable people who are stranded in no-man's land.... at the mercy of the weather as winter fast approaches."