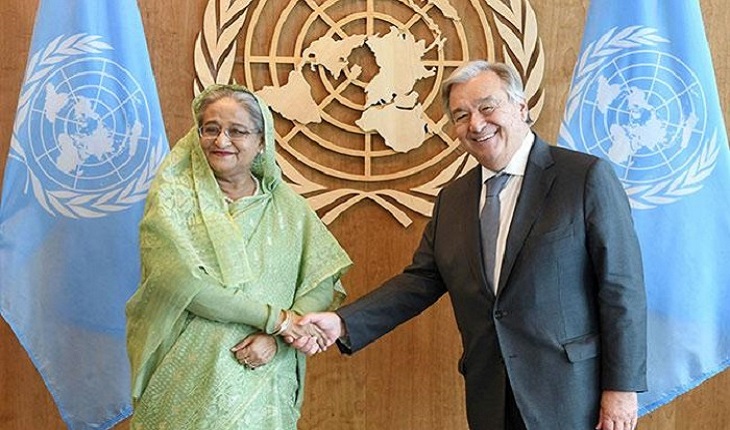 He also listed the exceptional contribution of Bangladesh to peace operations as well as Bangladeshi peacekeepers integrity and professionalism.

The UN head made the remarks when on Friday, Bangladesh's Ambassador and Permanent Representative to the UN, Rabab Fatima, delivered her credentials to the UN Secretary-General (SG) at UN Headquarters.

Rabab Fatima has become Bangladesh's 15th Permanent Representative (PR) to the UN after 1974, when Bangladesh became a member of the supreme body headed by Bangabandhu Nation Father Sheik Mujibur Rahman, the Bangladesh Mission said on Saturday.

Before this appointment, she was Bangladesh ambassador to Japan.

The PR sent greetings from the President and Prime Minister of Bangladesh to the Secretary-General after offering their credentials.

Guterres declared Bangladesh a UN ally and, under the leadership of Prime Minister Sheik Hasina, praised the socio-economic changes in Bangladesh.

He said Bangladesh is a valued member of the UN and is making a significant contribution to the international body's work.  The PR affirmed the ongoing commitment and support of Bangladesh to the UN and the policies and actions of the Secretary General.

Also addressing the Rohingya problem were Fatima and Guterres, and the SG promised that it would continue its efforts to find an early and lasting solution.

The PR invited the SG to attend Father of the Nation Bangabandhu Sheikh Mujibur Rahman's birth centenary starting in March 2020 and expressed that the occasion would be celebrated internationally in a fitting way.

Recalling UNESCO's recent decision to celebrate the 100th anniversary of its birth, she said that Bangladesh is planning to organize events and programs with the United Nations in New York, and she asked for support from the SG.

Ambassador Rabab Fatima, a career diplomat, entered the Bangladesh Foreign Service in 1989 and held important positions in the Ministry of Foreign Affairs in Dhaka, as well as holding permanent missions in New York and Geneva in Bangladesh; and various capacities in the missions in Kolkata and Beijing.

She also worked as Head of Human Rights with the Commonwealth Secretariat, London, and as Regional Representative for South and Southwest Asia with the International Organization for Migration.

Each upazila to get support centre for specially-abled people

Prime Minister comes back from Madrid