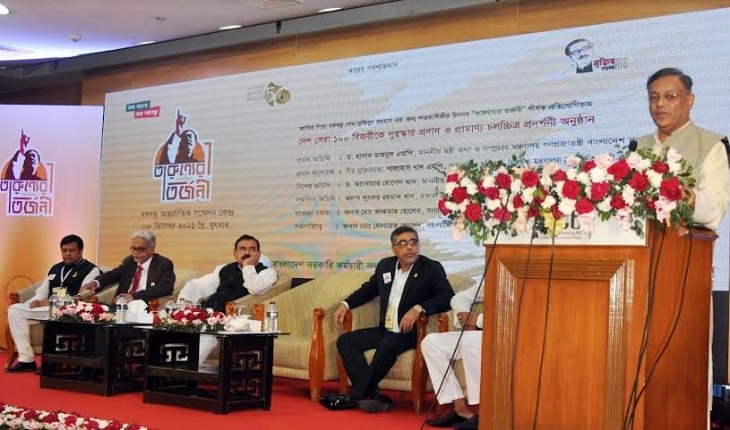 Information and Broadcasting Minister Dr Hasan Mahmud today said BNP doesn’t take any step against its leaders for making derogatory statements rather they patronize them.

“Awami League takes steps if anyone of the party makes indecent statements. But BNP doesn’t take step against their leaders if they make offensive statements but they (BNP) patronize them,” he said, addressing a prize giving ceremony ‘Tarunneyer Torjoni’ at an auditorium of Bangabandhu International Conference Center (BICC) here.

“But, BNP didn’t take any step against them. Even, none gave statement. Protest is must if anyone gives such statements from the ruling party. And it is normal. Everyone gets the proof that our party doesn’t spare anyone. But why everyone was silent regarding BNP? This is my question,” he added.

The minister said the BNP leaders are behaving indecently under the patronization of Tarique Rahman. MA Malek should have been removed from the party post after such derogatory statements made from UK which are available in social platforms, he added.

He said, “I would like to urge BNP secretary general Mirza Fakhrul Islam Alamgir to see their own faces in the mirror.”

He said some recent activities and statements of Dr Murad Hasan were criticized and the premier has asked him to tender his resignation as those activities tarnished the image of the government and the party as well. AL Jamalpur unit also expelled him (Murad) from his party post, he added.

Hasan said different organizations and BNP gave statements against the activities of Murad. “We welcome their statements,” he added.

BSKKF founder president Lutfur Rahman Khan, among others, addressed the function with its president Hedayet Hossain in the chair.

'Bangladesh is advancing at indomitable pace under PM'