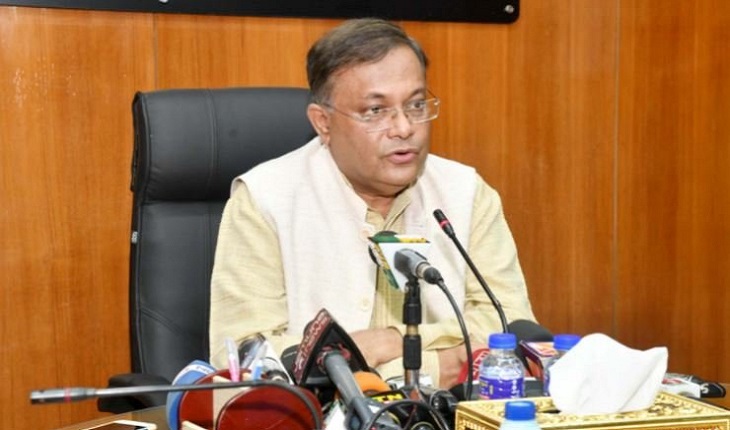 "The President has convened the dialogue over forming the Election Commission where different political parties are taking part in it. I hope that BNP will also take part in the dialogue and they can tell their objection to the President. But it is not desirable to show thumbs down to the dialogue," he said.

The minister stated this replying to a query of reporters at his secretariat office in the capital.

Hasan said dialogue is needed in the politics and the democracy and politics could not move ahead without discussion. "In fact, BNP doesn't believe in democratic norms and they want to destroy the democracy. For this, they are talking nonsense about the dialogue issue and spreading different confusions," he added.

Replying to another query over Union Parishad (UP) polls, the minister said it is the Awami League (AL) which is the alternative to the party (AL). The polls are being held with political party symbols for the second time, he added.

"It is proved that Awami League is the alternative to Awami League. There is no other alternative. And it was proved in the Union Parishads polls," said Hasan, also AL joint general secretary.

Replying to another query over a comment of BNP leader Ruhul Kabir Rizvi, the minister said the highest treatment facilities have been provided to Begum Khaleda Zia in the country. She is taking the treatment as she wanted and her chosen hospitals, he added.

Hasan said it is the unprecedented generosity of the Prime Minister to a convicted accused. The law minister has already explained that it is not possible to send her (Begum Zia) abroad, he added.

The minister said generally the treatment should be held at a government hospital under the supervision of the government. But now, BNP and the persons who are in duty of her treatment will be responsible if the health condition of Begum Zia is deteriorated as the full treatment is being held under BNP's supervision, he added.

Replying to another query, Hasan said four televisions are controlled by Singapore government. "But, there are 33 private TV channels are on air in the Bangladesh. The government doesn't control those media. There are only few newspapers in Singapore and most of those controlled by their government. We give the example of Singapore how the country becomes a developed one. But, we didn't talk about this sector (media)," he added.