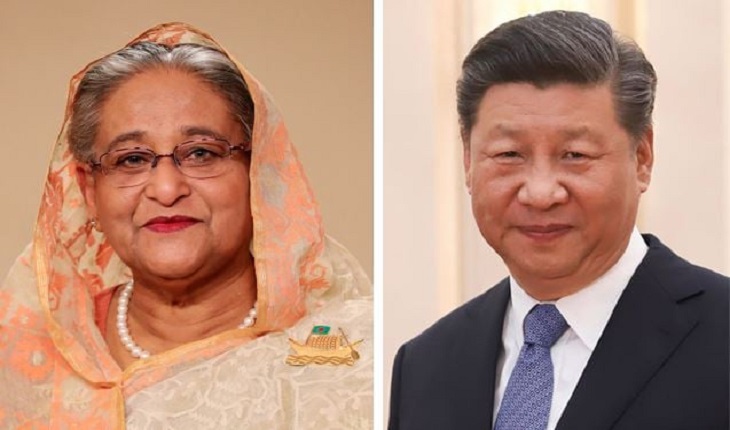 President of Bangladesh Awami League and Prime Minister Sheikh Hasina extended heartiest congratulations and warmest felicitations to Chinese President Xi Jinping on his reelection as the General Secretary (GS) of the Communist Party of China (CPC), the largest political party of the world.

In a letter to Xi Jinping, she wrote: "Your reelection is undoubtedly a fitting recognition of the trust and confidence reposed on you for your able leadership, achievements, and vision by the people of China and the CPC."

"I also convey my sincere congratulations on the successful conclusion of the 20th Congress of the CPC," a press release of the press wing of Prime Minister's office quoted the premier today as saying.

Sheikh Hasina stated that Bangladesh observed with great admiration the realization of the First Centenary goal of the CPC- building a moderately prosperous society in all respects by 2020- as set when President Xi first took over the position of the CPC's General Secretary in 2012.

The premier said, "'We commend your resolve and guidance in taking China on a new journey toward building a modern socialist country in all respects through innovation, economic policies, people-centered development philosophy, and multi-sectoral reforms."

"We welcome your endeavors to build a community of shared futures and appreciate your continued support of the socioeconomic development aspirations of developing countries," she added.

The Prime Minister said, "I believe you will contribute further to maintaining peace and stability across the globe in this challenging time."

She stated that the visit was marked by the transformation of bilateral relations between the two friendly countries into a 'Strategic Partnership of Cooperation.'

She also fondly recalled her visit to China in 2019, when she had a very productive meeting with the Chinese President.

The premier said he looks forward to working in close cooperation with the Chinese President to enhance the bilateral engagements further, strengthen the bonds of friendship between the two countries and peoples, and promote peace and stability in the region and the world.

Sheikh Hasina wished Xi Jinping continued success and good health and all the CPC members and delegates progress and prosperity in the coming days.