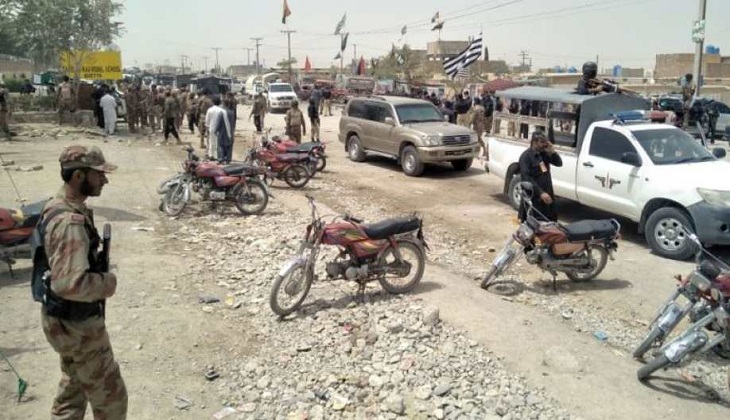 At least 14 people were killed and over two dozen others injured in a blast believed to be targeting members of the Hazara community in Quetta's Hazarganji area on Friday morning.

Abdul Razzaq Cheema, Deputy Inspector General (DIG) of Pakistan police confirmed the death toll and told that the blast was targeting members of the Hazara community.

Eight of those killed were Hazara, while at least one Frontier Corps soldier was martyred in the attack, DIG Cheema said. Police fear the death toll may rise.

The Hazarganji area in Quetta has been targeted by such attacks in the past. Hazara shopkeepers are known to purchase vegetables and fruits at the bazaar and sell them at their own shops. They are to be provided security escorts to and from Hazarganji.

The wounded are being shifted to Bolan Medical Complex for medical treatment, police said.

Rescue teams, police and Frontier Corps personnel have reached the site of the blast. The area has been cordoned off, and entry of outsiders to the spot has been restricted.

Balochistan Chief Minister Jam Kamal strongly condemned the attack. He assured that the elements involved in the attack and their heads would be proceeded against and directed the provision of the best medical treatment to those wounded.

"People who have an extremist mindset are a menace to society," the chief minister asserted. "We must foil the conspiracy to disrupt peace."

Hazaras are disproportionately targeted by sectarian violence as they are easily identifiable due to their distinctive physical appearance. Nearly half a million Hazaras have settled here since fleeing Afghanistan to escape violence in their homeland during the past four decades.

A report released by the National Commission for Human Rights (NCHR) last year stated that 509 members of Hazara community were killed and 627 injured in various incidents of terrorism in Quetta from January 2012 to Dec 2017.

NCHR official Fazeela Alyani had earlier said that all these lives were lost in Quetta. According to the NCHR, targeted killings, suicide attacks, and bomb blasts have inflicted harm to daily life, education, and business activities of ethnic Hazara community members in Balochistan's largest city.

Alyani had also explained that the fear and intimidation forced Hazaras to migrate to foreign countries, while target killings forced Hazara students to abandon their studies.

Balochistan has seen at least three others blasts in different areas over the last month, with varying targets.

At least two people were killed and 11 others injured in a bomb blast in a Panjgur bazaar.