Pro-Kremlin Party on Track for Majority After Crackdown 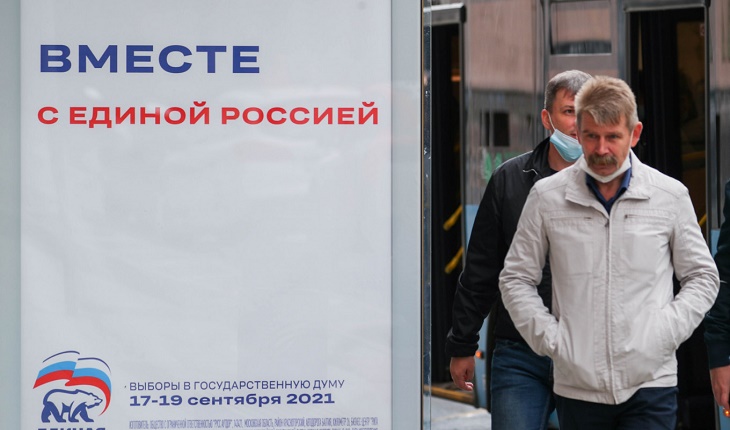 People walk past an election campaign sign promoting the United Russia Party in the run-up to the 2021 Russian legislative election | Photo: Alexander Shcherbak/TASS

President Vladimir Putin's United Russia party was on track to win a strong majority in a parliamentary vote, results showed Sunday, after an election that followed an unprecedented crackdown on the opposition.

The vote came in the wake of a clampdown this year that saw Putin's best-known domestic foe Alexei Navalny jailed and his organizations banned as "extremist."

In the lead-up to the election, all of Navalny's top allies were arrested or fled the country, with anyone associated with his groups kept from running.

Navalny's allies had called for opposition supporters to back other candidates who could potentially defeat United Russia, most of them from the Communists, and early results indicated the campaign may have had some success.

United Russia's share of the vote appeared to be down from 54.2% in the last parliamentary election in 2016, while the Communists had seen their support grow by about 10 points from 13.3%.

Voting by party list accounts for only half of the lower house State Duma's 450 seats, however, so it was unclear if United Russia would end up with fewer than the 334 seats it had going into the election.

The other half of seats are assigned according to single-mandate races, and with 15% of those votes counted United Russia candidates were ahead in at least 143 of the 225 seats.

Three other parties appeared to have met the 5% threshold needed to enter parliament — the nationalist LDPR, the recently formed "New People" party, and "A Just Russia," all with less than 10%.

The Communist Party's veteran leader Gennady Zyuganov hailed the results, telling reporters: "The voters heard us, believed us and voted for us."

"The aim of Smart Voting was to destroy United Russia's monopoly and that is what is happening," key Navalny aide Lyubov Sobol said during a live stream on YouTube.

Kremlin 'blackmail'
Authorities had taken drastic measures to deter the campaign, which guided voters on which candidates to support to have the best hope of denying Kremlin-aligned politicians a seat.

The campaign's website was shut down and on Friday Apple and Google removed the "Smart Voting" app from their stores, causing an uproar among the opposition who accused them of giving in to Kremlin "blackmail."

Sources familiar with Google and Apple's decision told AFP the move was taken under pressure from Russian authorities, including threats to arrest the tech giants' local staff.

Turnout was at 45% according to the latest figures released by the election commission at 15:00 GMT.

Critics said they expected the vote to be rife with fraud and Russian social media was inundated with reports of ballot stuffing.

They also pointed to online voting, new limits on independent election observers and the polls being spread over three days — a move officials said was to reduce coronavirus risks — as presenting opportunities for falsifications.

As of Sunday evening, independent election monitor Golos — which authorities branded a "foreign agent" ahead of the polls — had tracked over 4,600 reports of voting violations.

In addition to United Russia, 13 more parties were running in the elections, but they are widely seen as token opposition.

"There is no one to vote for," Andrei, a 33-year-old IT professional who declined to give his last name, told AFP in Moscow.

He cast his ballot in the "sham" elections, he said, to "at least show some kind of protest against the current government."

But Anna Kartashova, a 50-year-old pharmaceutical company manager in Moscow, said she voted for United Russia because she "simply trusts" Putin.

"We just don't see anyone else we can trust in the current political landscape," she said.

Putin to self-isolate due to COVID cases among inner circle