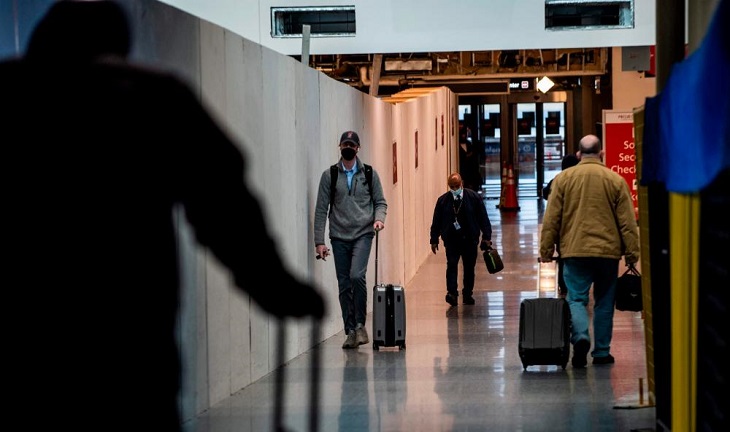 Some 11,500 flights have been scrapped worldwide since Friday and tens of thousands more delayed, during one of the year's busiest travel periods --with multiple airlines saying spikes in cases of the Omicron coronavirus variant have caused staffing shortages.

Effects rippled worldwide, with about 3,000 flights already canceled Monday and 1,100 more on Tuesday, according to flight tracker FlightAware.

Opening the way for more people to return to work sooner and minimizing the prospect of mass labor shortages, the US Centers for Disease Control and Prevention on Monday cut isolation for asymptomatic Covid-19 cases from 10 to five days.

The guidelines, which are non-binding but closely followed by US businesses and policymakers, further suggest that the five-day isolation period be "followed by five days of wearing a mask when around others."

Cases in the United States are already on track to reach record highs in January, fueled by large pockets of unvaccinated residents as well as lack of access to quick and easy testing.

President Joe Biden said Monday some US hospitals could be "overrun" but that the country is generally well prepared to meet the latest surge and Americans need not "panic."

In a virtual meeting with state governors and top health advisors, Biden stressed that the rapid spread of Omicron would not have the same impact as the initial outbreak of Covid-19 or the Delta variant surge this year.

Nationwide, the United States is closing in on the daily high of 250,000 cases recorded last January in the world's most affected nation, which has lost more than 816,000 people to the pandemic.

- New measures in Europe -
Governments worldwide are scrambling to boost vaccinations, stressing that the overwhelming majority of hospitalizations and deaths are occurring among the unvaccinated.

Ministers did call for employers to make staff work from home three days a week where possible after nationwide infections hit record-high figures -- in line with Denmark and Iceland, which also reported record daily cases.

Similarly to the United States, French Prime Minister Jean Castex said the government would announce by the end of the week a reduction in the number of isolation and quarantine days required for those with Covid and their contacts.

England's Premier League, meanwhile, announced that a record 103 players and staff had tested positive in the past week.

And in Greece, authorities will require bars and restaurants to close at midnight from January 3, when establishments will also have to limit the number of diners per table to six.

- China strategy tested -
In the Chinese city of Xi'an, authorities were scrambling to contain the country's worst Covid outbreak in 21 months.

Desperate to keep a lid on the pandemic before February's Beijing Winter Olympics, China has stuck to a "zero-Covid" strategy, involving tight border restrictions, lengthy quarantines and targeted lockdowns. But there have been sporadic flare-ups.

Some 13 million residents are already confined to their homes in Xi'an, where Covid controls were tightened Monday to the "strictest" level, banning residents from driving.