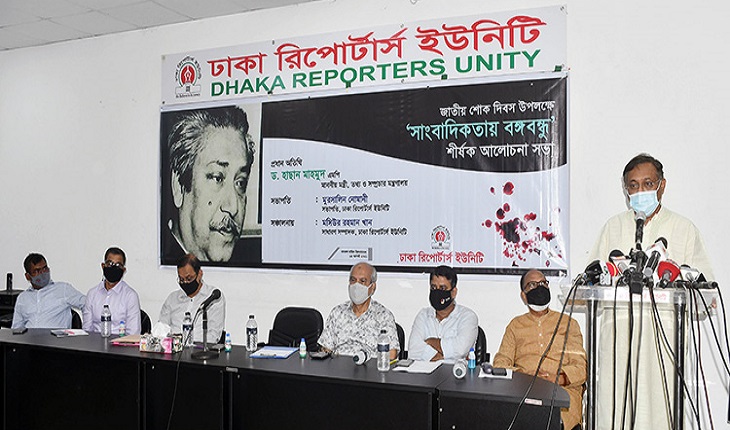 Information and Broadcasting Minister Dr Hasan Mahmud today said the practice of ethics in mass media is very important in the multidimensional development of society and state.

He came up with the remark while speaking at a discussion on ‘Bangabandhu in Journalism’ organised by Dhaka Reporters Unity (DRU) at Segunbagicha in the capital marking the National Mourning Day.

Speaking as the chief guest, Hasan, also the Awami League Joint General Secretary, said the expansion and freedom of mass media are very necessary in multidimensional development of the state, democracy and society, and at the same time, ethics in journalism is vital an argent to this end too.

Otherwise, he said, the fourth pillar of the state as well as the state itself will be affected, while the aim of media will be successful if there is ethics in journalism apart from its expansion.

Asking a question about the declaration of the newspapers, which are not being published regularly, the information minister said: “These are ghost newspapers. Employees (of these newspapers) are not paid and they are involved in various misdeeds including extortion.”

This disgrace is put on the journalist society, which is not right at all, he said, adding, “That's why we have started taking action against the ghost newspapers”.