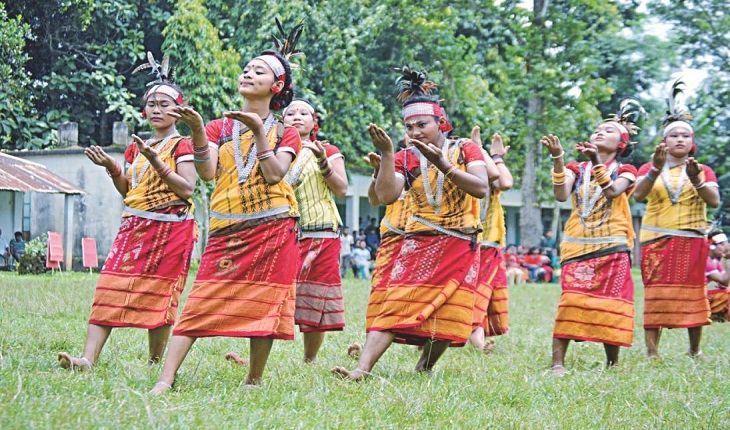 Education is assessed as one of the rudimentary constitutional rights for any Bangladeshi. Tribal education right signifies to the system of preserving their legitimate rights to education through the implementation of their respective mother tongues. Constitution of Bangladesh and other national and international organizations such as the Universal Declaration of Human Right (UDHR), International Covenant on Civil and Political Rights (ICCPR), International Covenant on Economic, Social and Cultural Rights (ICSCR) International Convention on the Elimination of all Forms of Racial Discrimination (ICERD), Convention Elimination of all forms of Discrimination Against Women (CEDAW), Child Rights Convention (CRC) and International Labor Organization  (ILO) 107 pledge to preserve indigenous education rights to their mother tongues, along with their own distinctive cultures, heritages, languages, customs, rituals, norms and beliefs.

The UN Convention on the Rights of aboriginal Peoples avows that they too have the right to launch and regulate their educational schemes and institutes and to postulate education in their diverse languages, in a manner appropriate to their cultural approaches of teaching and learning.

Therefore, measures must be taken to ensure the opportunity to acquire education at all levels for the ethnic people and to preserve and promote the expansion and practice of tribal languages. Children should be taught to read and write in their own indigenous language or in the language most commonly used by the group to which they belong and adequate measures can be taken to ensure the opportunity to attain fluency in the national language or the state’s official language. The state can preserve the indigenous cultures and histories by means of written translations and those who are in most direct contact with the people, with the objective of eliminating prejudices and biases. Textbooks and other educational materials should be introduced in such a way that can help to provide a fair, accurate and informative portrayal of the histories and cultures of these people.

However, In Bangladesh, most of the children (students), especially the Rakhine are deprived of due to a biased education system that does not recognize their language and culture. They are taught in Bengali, an only constitutionally approved “state language of Bangladesh” as it is stated in the Constitution of Bangladesh at “Article-3”.Therefore, the Rakhine students cannot comprehend the language and also cannot incorporate with what they are taught.  Many of them quickly lose interest in school and leave their education forever.

Most of the Bangladeshi indigenous communities have their own language. Some have their alphabet too. However, day-by-day these languages are becoming extinct. A study conducted by BRAC exhibits that more than 31.9% of ethnic people do not think to study in their mother language. Dr. Muhammad Rafi, the lead researcher of the study titled as “Small Ethnic Groups of Bangladesh; A Mapping Exercise”, thinks that ignorance of the government and pressure of another culture have made the situation worst.

The pressure is so high among the Rakhine people that some mothers dare not teach their children in their mother tongue, rather they think that it will be better for their security to mix up with the mainstreams’ language and culture.

Therefore, the literacy rates of the Rakhine people are falling at an alarming rate in Bangladesh due to the dominant monolingual language policy. The hegemonic linguistic policy does not recognize any ethnic language except Bengali, the national language.  Neither the Constitution nor any Bangladeshi law specifically recognizes the Rakhine people and their right to education in their mother tongue.

Therefore, the Constitution (Article 15 and 17) of Bangladesh refers to free and compulsory education and directs the state to adopt effective measures for the purpose of establishing a uniform, mass-oriented and universal system of education and extending free and compulsory education to all. Following the Constitution, The Government of Bangladesh has committed itself to achieve Education for All (EFA) and ensuring the Rights of the Child (UN CRC, 1989). The link between education in mother tongue and achieving EFA has been made by the World Bank, UNICEF and UNESCO. Mother Language in Education (MLE) will enable the Government of Bangladesh to achieve its goals under EFA (Education for All) project.

On 10 June 2015, a national seminar titled with “Introducing Mother-Tongue Based Primary Education for Indigenous Children: Present Perspective and Way Forward” organized by Bangladesh Indigenous Peoples Forum, declared that Education in mother tongue is a must as it connects a child with his/her culture and literature and aids informing his/her intellectual identity. It can help them to achieve higher education. The seminar discussed that initially the education would be provided in five languages including that of the Chakma, Marma, Tripura, Sardi and Garo though it is not possible to provide capable and efficient indigenous teachers to teach the students in their mother tongue. It requested to Multi-lingual Education (MLE) Forum to create pressure on the government to take steps in this regard immediately. It also declared that education is one of the basic rights recognized by the Constitution.

It will be possible to reduce the drop-out problem, If the textbooks on the Rakhine language are provided at least up to secondary levels along with lessening financial and accommodation problems, the Rakhine children will be greatly benefitted. The fund should be generated to publish the books in their mother tongue. In 1971 the people of Bangladesh won independence in which the language movement in 1952 has played the role of a catalyst to snatch the freedom of the land. Many Adibashi fought in the war. Since the war of independence, none has questioned Adibashi Bangladeshi’s right to education in their mother tongue.

Therefore, Adivasi Bangladeshi children cannot enjoy the right to education in their mother tongue. Whereas, Bengali Bangladeshi children attend school in their mother tongue, Bengali. The vast number of Adibashi children must enter the schools and learn in a language that they do not know or understand. Though the initiatives for multilingual primary education for the Rakhine children are going forward according to the Education Policy 2010, the progress of this initiative is very slow. Although it started in 2012, the pre-primary education books in their language have not been published yet in 2015 and also the education budget is decreasing each year. The budget should be increased to secure education for all and to ensure the Rakhine’s rights to education through their respective mother tongue.