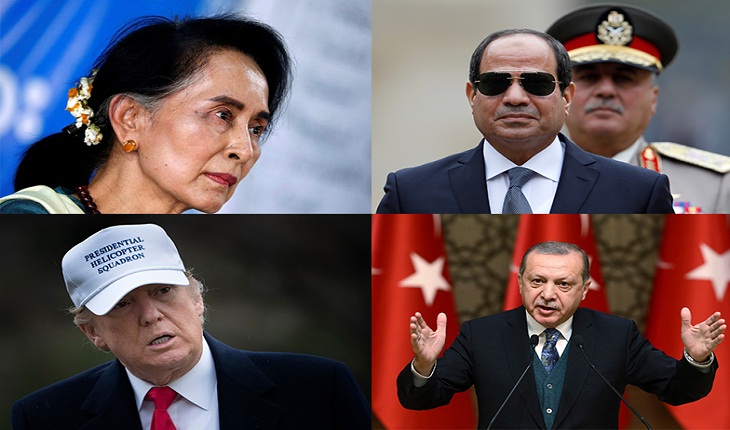 The CPJ came up with the remark after five days in response to Trump’s “announcement via Twitter about his planned “fake news” awards on January 3.

“Trump, by contrast, has consistently undermined domestic news outlets and declined to publicly raise freedom of the press with repressive leaders such as Xi, Erdoğan, and Sisi. Authorities in China, Syria, and Russia have adopted Trump's "fake news" epithet, and Erdoğan has applauded at least one of his verbal attacks on journalists,” CPJ said.

Under Trump’s administration, the Department of Justice has failed to commit to guidelines intended to protect journalists’ sources, and the State Department has proposed to cut funding for international organisations that help buttress international norms in support of free expression, it added.

“As Trump and other Western powers fail to pressure the world's most repressive leaders into improving the climate for press freedom, the number of journalists in prison globally is at a record high, it said.

“CPJ is recognizing world leaders who have gone out of their way to attack the press and undermine the norms that support freedom of the media,” CPJ said on its web site yesterday.

From an unparalleled fear of their critics and the truth, to a relentless commitment to censorship, these five leaders and the runner-ups in their categories have gone above and beyond to silence critical voices and weaken democracy, it said.

Suu Ki won under the category for the obstruction and harassment of journalists by Myanmar security officials who were trying to cover what the UN has termed “a textbook example of ethnic cleansing” by authorities in the country’s northern Rakhine State.

On December 12, two Reuters reporters covering the crisis were arrested on suspicion of violating the Official Secrets Act and held incommunicado for two weeks before being allowed to see their lawyer and families. Reuters reported that if convicted, the pair could face up to 14 years in prison, CPJ said.

“… after Suu Kyi's party took power in 2016,…most of the legal structure that has long restricted the press remains in place and journalists continue to be imprisoned, it added.

Polish President Andrzej Duda is the runner-up in the award category.

Leaving all behind, Turkish President Recep Tayyip Erdoğanbecame the champion for “Most Thin-skinned” and “Most Outrageous Use of Terror Laws Against the Press”.

“Turkish authorities have repeatedly charged journalists, news outlets, and social media users for insulting Erdoğan, insulting other Turkish leaders, and insulting "Turkishness" in general. Over the course of 2016, the Turkish judicial system handled 46,193 cases of "insulting the president" or "insulting the Turkish nation, the Republic of Turkey, the parliament, the government, or the institutions of the judiciary," the daily newspaper Cumhuriyet reported in June 2017, citing figures from the Justice Ministry,” CPJ said.

Terming Turkey “the world’s worst jailer of journalists”, CPJ said that with at least 73 behind bars when it conducted its most recent prison census on December 1.

“Every journalist jailed for their work in Turkey is under investigation for, or charged with, anti-state crimes -- in most cases for belonging to, aiding, or making propaganda for an alleged terrorist organization,” it added.

Egypt President Abdel Fattah el-Sisi is the runner-up in this category of “Most Outrageous Use of Terror Laws Against the Press”.

Trump throws full US support behind protesters in Iran