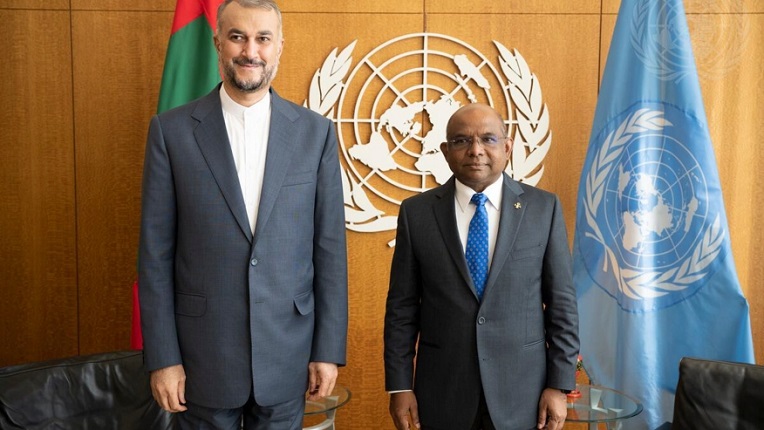 Iran's foreign minister said Friday that stalled talks on the Iranian nuclear accord would resume "very soon" but the United States responded by saying it wasn't sure what timeframe Tehran had in mind.

The talks, brokered by the Europeans, seek the return of the United States to the 2015 agreement trashed by former president Donald Trump -- as well as Iran's return to full compliance.

"We are reviewing the Vienna negotiations files currently and very soon Iran's negotiations with the four plus one countries will recommence," Hossein Amir-Abdollahian told reporters in New York, referring to Britain, France, Russia, China and Germany.

"We see a constructive type of negotiation that will lead to tangible verifiable results in the foreign policy of the new government in Iran," the foreign minister added during a press conference on the sidelines of the UN General Assembly.

"As soon as we finish the review process, without any time to be wasted, we shall return to the negotiations table," the official said.

State department spokesman Ned Price said the US had heard the "message" of "soon and very soon" all week at the UN.

"But we have up until this point not received clarity on what precisely that means," he told reporters.

European nations are trying to kick start the deal, known as the Joint Comprehensive Plan of Action, that Trump pulled America out of in 2018. He reinstated sanctions on Iran that Washington had lifted as part of the agreement.

Since then, Tehran has also retreated from many of its commitments.

- US frustration -
Trump's successor Joe Biden has indicated he wants to return to the deal, but his administration has expressed impatience at the stalled talks.

A senior US official this week made clear Washington's frustration with Tehran over the absence of any "positive indication" it is prepared to return to the talks to "close down the remaining issues."

But Amir-Abdollahian pointed the blame at Biden's administration, accusing the White House of sending "contradictory messages" on reviving the deal.

"In the last few months, we have not seen an iota of positive action by the United States administration," he said.

Talks between Iran and the remaining five parties aimed at reviving the deal began in Vienna in April but have been suspended since June, when ultraconservative Ebrahim Raisi was elected president.

Hopes of reviving the deal were kept alive earlier this month when Iran agreed to a new compromise with the UN nuclear agency on the monitoring of its nuclear facilities.

European governments said they heard nothing concrete from Amir-Abdollahian during their meetings on the sidelines of the UN General Assembly this week.

"The prospects I think I can say are optimistic," he told reporters in New York.

"We will certainly pursue a negotiation that serves the rights and interests of our nation," he said.