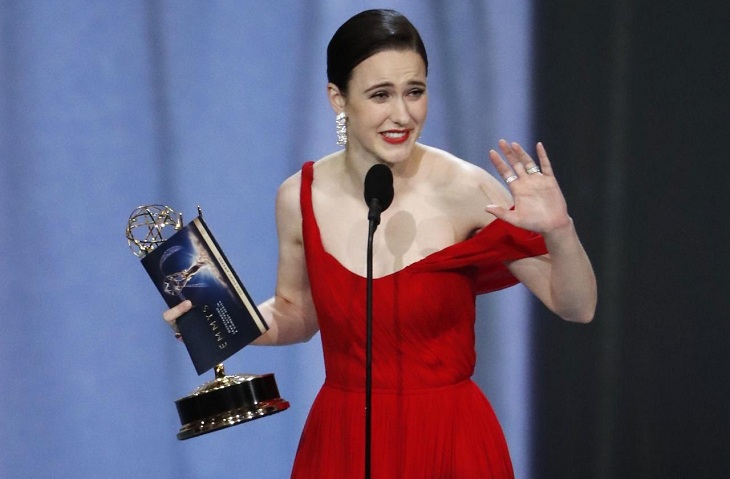 The stars of British royal series "The Crown" and Cold War spy show "The Americans" won Emmys on Monday on a night of upsets for the highest honors in television.

Claire Foy beat presumed front runner Elisabeth Moss, star of "The Handmaid's Tale," to win for her quiet but formidable portrayal of Queen Elizabeth in Netflix drama "The Crown."

"This wasn't supposed to happen," said a surprised Foy.

Matthew Rhys took the best drama actor statuette for playing a conflicted Russian spy in the final season of the FX Cold War series "The Americans."

"Mrs. Maisel" is also a front runner for best comedy series, which will be presented at the end of the three-hour awards show.

"Saturday Night Live" comedians Michael Che and Colin Jost sprinkled the evening with satirical skits about increases in diversity on television, sexual misconduct in the entertainment industry, and the dominance of streaming services like Amazon and Netflix over traditional networks.

Netflix this year notched a leading 112 Emmy nominations, ahead of HBO and NBC.

"I think we can keep TV going for another 5-6 years tops," Jost quipped.

"We solved it!" sang a line-up of celebrities, giving themselves a tongue-in-cheek pat on the back for the strides television has made for women, people of color, and gay men and women compared to the movie industry.

The biggest shock of the night came when presumed front-runner Donald Glover, the star and creator of the surreal hip-hop-inspired FX show "Atlanta," lost out in the comedy acting category to Bill Hader's hitman-turned-struggling actor in HBO's showbusiness satire "Barry."

"Barry" also brought honors for veteran Henry Winkler, winning a standing ovation and his first-ever Emmy for his supporting role as a self-important acting teacher.

"I wrote this (speech) 43 years ago," said the former "Happy Days" actor, who had been nominated six times previously. "If you stay at the table long enough the chips come to you."

Regina King was an unexpected limited series winner for playing the mother of a black teen killed by a white police officer in "Seven Seconds." Peter Dinklage won for "Game of Thrones," and Thandie Newton was chosen for her supporting role in sci-fi series "Westworld."

"I don't even believe in God, but I am going to thank her tonight," Newton said.

The best drama series prize, to be announced later on Monday, pits medieval fantasy "Game of Thrones" against Hulu's bleak "The Handmaid's Tale," with "The Americans" seen as the biggest potential spoiler.

‘I must return’: Anju Ghosh hints at Bangladesh film comeback