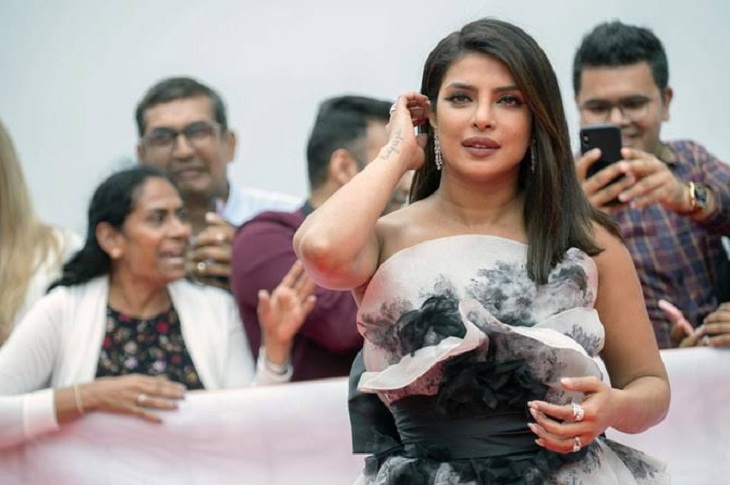 No Indian star has made a bigger splash in Hollywood than Priyanka Chopra and the "Baywatch" actress told AFP she is on a quest to shatter myths about Bollywood, including its approach to sex.

Chopra was the first Indian actress to lead a primetime US series with FBI thriller "Quantico," and cemented her global celebrity status by marrying pop singer Nick Jonas last December.

That star power secured a glitzy, red-carpet slot at Toronto's film festival for "The Sky is Pink," Chopra's first Hindi-language film in three years. It is the only Asian film on the prestigious gala lineup at North America's biggest movie festival.

"People get surprised when they see 'The Sky is Pink' and they're like, 'this is not a Bollywood movie.' Bollywood is not a genre!" Chopra told AFP ahead of the premiere Friday.

"It really is my quest to educate people in that."

Directed by Shonali Bose, "The Sky is Pink" tells the tragic true story of Aisha Chaudhary, an inspirational Delhi teenager whose life was cut short by a rare genetic disorder.

Chaudhary delivered a TED talk and wrote a book on her battle before her death in 2015 at the age of 18. But the film focuses on her parents, exploring how their marriage and love and even their sex life survived the loss of two children.

Until recently kissing was rarely shown in films made by conservative Bollywood, better known abroad for its colorful musical numbers and fairytale romantic plots.

"It's culturally sensitive, yes," she added. "India is an amalgamation of modernity and tradition. And this film is made by a modern Indian. So hence, you see what her language is. This is true to who she is."

Bose, whose own marriage ended after she lost her son, was approached by Chaudhary's parents to make the film.

Chaudhary had been a fervent fan of the director's work, and never fulfilled her "dying wish" to see Bose's previous film "Margarita With A Straw."

Bose told AFP she was moved by the request but chose to focus on the parents after learning of their "amazing" love story and care for their child.

"They wanted the film to be about their heroic dying teenage girl, and I don't feel she would've wanted to be on a pedestal actually she was really cool and humble," she said.

Chopra, who does not have children, said she drew on others' experiences, including Bose's, to play Chaudhary's mother Aditi.

But there is plenty of Chopra in the role too. At one point her character is described as "the 'almost' Miss India." Chopra herself was crowned Miss World in 2000.

As beauty pageants led to acting, Chopra, who attended school in the US, said she held onto her global outlook.

Also a singer, Chopra has released songs with US chart-toppers including Pitbull and The Chainsmokers.

"It's a genuine quest of mine to be able to cross-pollinate cultures, and to be able to take Indian cinema to the globe as much as I can," she said, adding: "It's not the language that's the barrier it is the fear of the unknown."

Movie-mad India has the largest film industry in the world in terms of the number produced up to 2,000 every year in more than 20 languages, according to industry data.

In recent years Bollywood's influence has spread in North America, thanks to a growing, affluent South Asian diaspora and a smattering of Western converts.

"I really hope that there's so many more entertainers from India that get the opportunity and push themselves towards global entertainment," said Chopra.

"The world of entertainment is so global now," she added. "With streaming coming in everyone from anywhere can watch anything."