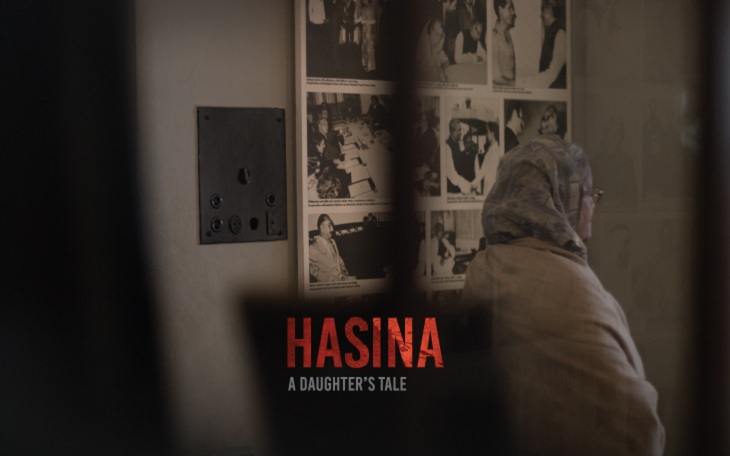 ‘Hasina- A Daughter’s Tale’, a docudrama on life and struggle of Prime Minister Sheikh Hasina, was screened at the 11th DMZ International Documentary Film Festival in Seoul, South Korean on Saturday.

The second show of the film will be held in the festival tomorrow, said an official handout here today.

Under the arrangement of the Bangladesh Embassy to South Korea, the docudrama was screened today for the diplomats living in Seoul.

The 72-minute docudrama narrates the struggle and sacrifice of Prime Minister Sheikh Hasina after the brutal assassination of Father of the Nation Bangabandhu Sheikh Mujibur Rahman in 1975.

Before the screening of the film in the festival, State Minister for Power, Energy and Mineral Resources Nasrul Hamid, who is one of the producers of the film, delivered a welcome address.

The love of people of Bangladesh had brought her (Sheikh Hasina) to take the helm of the party, he said adding that her sacrifice will be followed by the next generation.

Bangladesh Ambassador to South Korea Abida Islam was present on the occasion, among others.

The 11th DMZ International Documentary Film Festival kicked off on September 20 and it will continue till September 27.

The docudrama, directed by Piplu Khan, is basically a heartrending biopic that portrays a fascinating account of a daughter’s perspective how the country’s darkest hours on August 15, 1975 had changed Sheikh Hasina’s life forever.

It was released on November 16, 2018, while the trailer was earlier released on September 28 in the same year marking the 72nd birthday of Prime Minister Sheikh Hasina.

Action to be taken for operating illegal casinos: Kamal