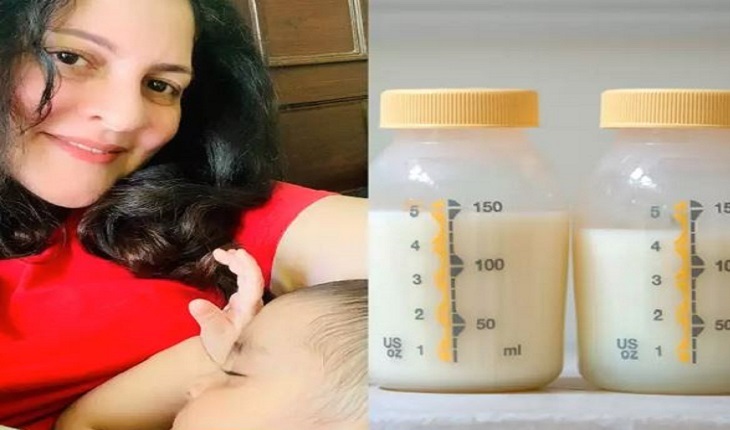 Breastmilk is the most wonderful source of nourishment for little babies. Unfortunately, not all newborns are able to receive exclusive breastfeeding.

A Bollywood film director has now become an angel for a lot of little ones in need by donating upto 40+ litres of breastmilk to a milk donation bank and saving precious lives during the pandemic, raising awareness for the same.

In a country where breast milk donation is still a taboo topic, Nidhi Parmar Hiranandani has contributed to a noble initiative which is absolutely praiseworthy.

Here's what we know so far Nidhi, a film director, who is known for her film, 'Saand Ki Aankh' gave birth to her baby boy, Veer in February 2020.

While she was thoroughly enjoying nursing her baby, she faced a problem a lot of women face in the initial months of motherhood- an excess supply of breastmilk. Since she was expressing feed for storage and later use, she reached a point where her freezer was full of breastmilk, which would have otherwise gone to waste, had she not used it wisely.

After approaching her friends and the internet for help, she realized that breast milk donation was the best bet to utilize her feed and help other babies.

In an interview to BetterIndia, Nidhi, 41 said: "After nursing my child, I realised that I still had a lot of milk leftover. I had read on the internet that breast milk does have a shelf life of three to four months if properly stored in a refrigerator,”

Nidhi also said that she knew of some other lucrative uses, including jewellery making and face packs:
“The internet suggested making face packs out of it. Some of my friends said they bathe their babies with it or even use it to scrub their feet. Since I thought this was a cruel waste of milk, and I did not want to give it to salons (laughs), I began researching breast milk donation,”

Nidhi got in touch with a breastmilk bank set up at a hospital in Mumbai, which, luckily, was in need of breastmilk donation in the lockdown.

Talking of the noble act, Nidhi said that she went on to donate more than 40 litres of milk for babies in need!

"I contacted my gynaecologist at Women’s Hospital, Bandra, who suggested I donate the milk to Surya Hospital. Up until that point, I had about 20 packets of 150 ml each in my fridge, but the thought of getting out to donate during the lockdown was concerning, for I now had a baby at home."

According to doctors, Nidhi's breastmilk donation was able to help a lot of babies who survive on exclusive breastfeed, or are being taken care of in the NICU.

Breastmilk donation can also be helpful for moms who find it difficult to lactate or express milk. Parents who adopt babies, or make use of a surrogate also find the option helpful.

Nidhi's donation isn't the first of its kind. Breastmilk donation is a very helpful thing which can help care for premature babies, moms with health conditions who may find it difficult to lactate.

Since most lactating moms are eligible for donation, it can help save a lot of lives in need. Expressed breastmilk from other moms is especially helpful for babies with medical conditions, who are immunocompromised or have metabolic absorption problems. Moms who have a low milk supply can also benefit from the noble cause.

While the noble cause is slowly gaining awareness in India, there are over 10 operational mother's milk banks present in our country.