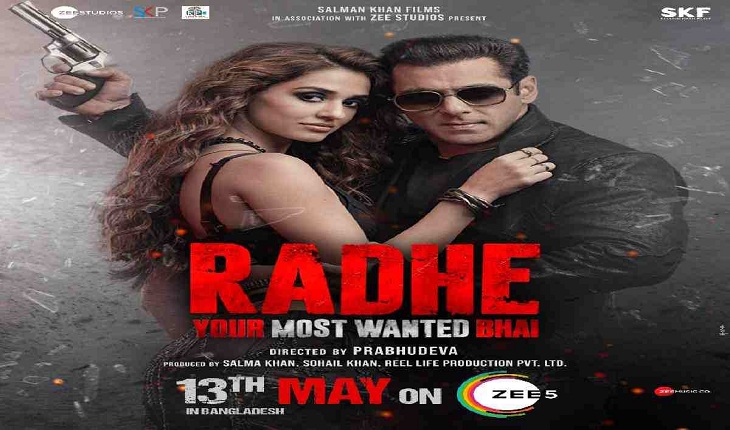 ZEE5 Global, the largest global OTT platform for South Asian content, is all set to release the most anticipated Bollywood film of 2021 -- Salman Khan starred 'Radhe: Your Most Wanted Bhai' -- for its viewers in Bangladesh on May 13.

The first Bollywood big-scale entertainer releasing this festive season, 'Radhe: Your Most Wanted Bhai', will have a digital release in Bangladesh and will be launched on ZEE5 in other global markets too following the theatre release of the movie.

With Bollywood superstar Salman Khan in the lead and co-starring Jackie Shroff, Randeep Hooda, and Disha Patani in pivotal roles, Radhe will be available for audiences in Bangladesh on ZEE5 in a special combo offer, according to a release.

The film’s enthralling plot revolves around Radhe, a cop who has his own way of dealing with criminals. The trailer offers a sneak peek of the exciting action sequences and dance numbers, akin to a classic Bollywood blockbuster.

ZEE5 subscribers can buy an annual pack for 720 BDT to watch Radhe along with 130,000 plus hours of ZEE5 Originals, movies, TV shows, TV channels, and video content, including Bangla Originals like Mainkar Chipay, Contract and Jodi, Kintu Tobuo, without advertisements.  The film’s trailer has already become a fan-favorite, amassing 78 million-plus views on YouTube.

Archana Anand, Chief Business Officer of ZEE5 Global, said, “Salman Khan’s films are well-loved the world over and fans from across countries have eagerly been waiting to watch this latest release. We’re thrilled to release Radhe on ZEE5 for our Bangladeshi audiences on the very special occasion of Eid and to enable them to watch Superstar Salman Khan’s latest release from the safety of their homes."

"Bangladesh has always been a high-priority market for us and we aim to reach every online screen in the country with the biggest blockbusters and best offers to enable people to access this content,” she added.