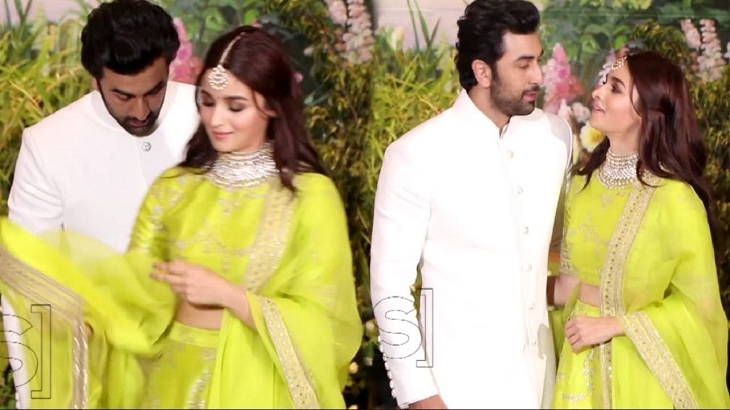 Ever since her fake wedding card went viral this week, bollywood actor Alia Bhatt is being bombarded with questions about her wedding at airports.

Recently, yet another report in medias claimed that the wedding with Ranbir Kapoor may happen in November in France.

On Thursday, as she was returning from her London vacation with boyfriend Ranbir Kapoor, the same question was posed by the paparazzi, reports The Statesman.

The photographers asked her multiple times if the rumours of her wedding with Ranbir were true. She tried her best to avoid their questions but finally said, “The rumours are flying and they will keep flying,” she said as she escaped to her car.

Earlier, a wedding invitation to her ‘sagan‘ ceremony with Ranbir had gone viral on social media.

It announced that the ceremony will take place in January 2020.

However, it misspelled Alia’s name as ‘Aliya’ and mentioned her father’s name as ‘Mukesh Bhatt’. Her father is filmmaker Mahesh Bhatt.

When she was leaving for London, Alia had confirmed that the card was indeed fake.

Her uncle Mukesh Bhatt also talked about the same.

“Alia is busy shooting for Sadak 2 in Ooty.

Alia was asked about marrying Ranbir at a recent conversation with Karan Johar and Kareena Kapoor at the JIO MAMI Film Festival.

“Honestly, I never thought about it. Why do we think about it now also? We cross that bridge when we come to it,” she had said.

Alia and Ranbir will soon be seen together for the first time in Ayan Mukerji’s Brahmastra. They star in the film with Amitabh Bachchan and Mouni Roy. It is slated to release next year.

Neha Kakkar forcibly kissed by a contestant of Indian Idol