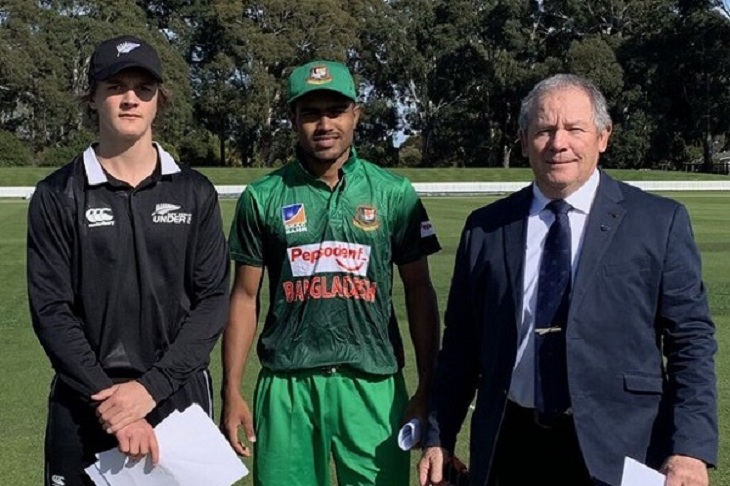 Bangladesh Under-19 team’s hopes to whitewash New Zealand in the five-match youth ODI series was shattered after they tasted a four-wicket defeat at the hands of hosts in fourth match of the series at Bert Sutcliffe Oval in Lincoln on Wednesday.

Bangladesh youth had already clinched the series, having won the first three matches in row. But they came to the fourth match with an intention of taking a giant stride towards inflicting a whitewash on New Zealand U19 team.

Being sent to bat first, Bangladesh piled up a respectable 295-8 but, New Zealand looked determined in their bid to avoid the scare of whitewash. They played confidently and sealed the deal
with five balls to spare, making 296-6.

Fergus Lellman, who scored a century in the side’s losing cause in third match, led the charge with 71 ball-76, clattering 10 fours and two sixes. Skipper Jesse Tashkoff came up with ably support, having struck an unbeaten 66. Opener Ollie White was the other notable scorer with 45.

For Bangladesh U19, Asadullah Galid took 3-78 in nine overs.

Four batsman, however, smacked half-century for Bangladesh to build a decent total, which at the end was not enough against a stubborn New Zealand batsmen.

Towhid Ridoy was the highest scorer with 73. Skipper Akbar Ali made 44 ball-66 with eight fours and two sixes.

The fifth and final match between the two sides is on October 13 at the same venue and Bangladesh will be looking to make it 4-1 after the whitewash chances are ruined.