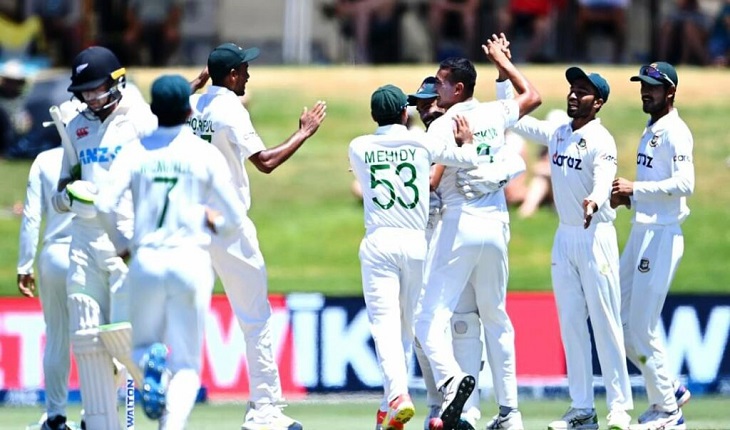 Fast bowler Ebadot Hossain claimed his career-best 4-39 as Bangladesh closed in on their first victory in any format of cricket on New Zealand soil, after leaving the hosts in a position of embarrassment on day four of the first cricket Test at Bay Oval in Mount Maunganui today.

Ebadot's fiery spell left New Zealand at 147-5 at stumps, giving them only 17 runs lead. Bangladesh hoped to wrap up New Zealand's second innings quickly on fifth day and set a smaller target for them to win the game.

But the only barrier for their aspiration is Ross Taylor, the New Zealand senior batter was batting on 37 with Rachin Ravindra on 6.

Bangladesh played 176.2 overs which is the longest innings on New Zealand soil since 2009.

As New Zealand were shot out for 328 in their first innings, Bangladesh ended with a handy 130-run lead, which is the Tigers only second first innings lead at away. And it was the highest lead the New Zealand conceded in a home Test since the start of 2017.

After the half-century of Mahmudul Hasan Joy, Najmul Hossain Shanto, skipper Mominul Haque and Liton Das, Mehidy Hasan closed in on a fifty but was out on 47. Yasir Ali Rabbi, the other overnight batter scored 26.

However, such was Bangladesh dominance in the first innings that they came out in second innings highly motivated, only to see opener Will Young resisting them hard.

Young and Taylor combined for a 73-run partnership for the third wicket stand to help New Zealand weather Bangladesh's 130-run lead and looked in utter control.

Here then in came Ebadot and his late afternoon spell titled the game Bangladesh's way completely. In his just seven balls, across two overs, Ebadot scalped three wickets including that of Young to make Bangladesh heavily favourite to win the Test.

Eabdot was considered as the weakest link of Bangladesh's pace bowling and is being subjected to online troll regularly but still the team management gave him a long rope and he paid the belief when it mattered most.

Young was clean bowled out by Ebadot after scoring 69 with seven boundaries. Ebadot then removed Henry Nicholls and Tom Blundell for duck to expose New Zealand's tail.