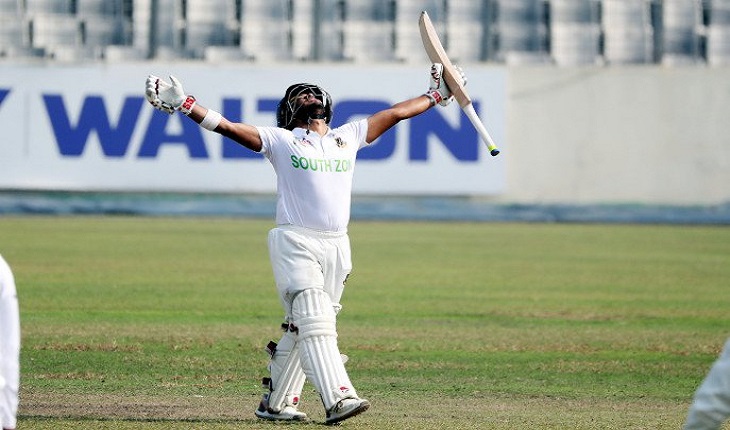 Mithun struck 206 off 306 balls on day three, hitting 27 fours and three sixes to help Central Zone racking up 438 in their first innings today. His knock earned the side for a crucial 51-run lead.

At stumps, South Zone weathered the deficit to 8 runs, reaching 43-1 with Pinak Ghosh batting on 22 and Amite Hasan on 20. South Zone were bowled out for 387 in their first innings.

Resuming the day on 184-4, Mithun and another overnight unbeaten batter Shuvataga Hom put South Zone bowlers on sword to accelerate the innings.

Shuvagata also reached his century and looked strong to make it bigger one. However Mahedi Hasan had him trapped leg-before after he scored 116 off 219 with a dozen of boundaries.

Mithun and Shuvagata shared 283-run for the fifth wicket stand after Central Zone were reduced to a precarious 16-4.

Mithun went on to score his maiden double century before Rishad Hossain trapped him leg-before. Jaker Ali and Robiqul haque then took the side past 400 and earned a lead for the side.

Success in Sri Lanka will give us momentum: Mithun