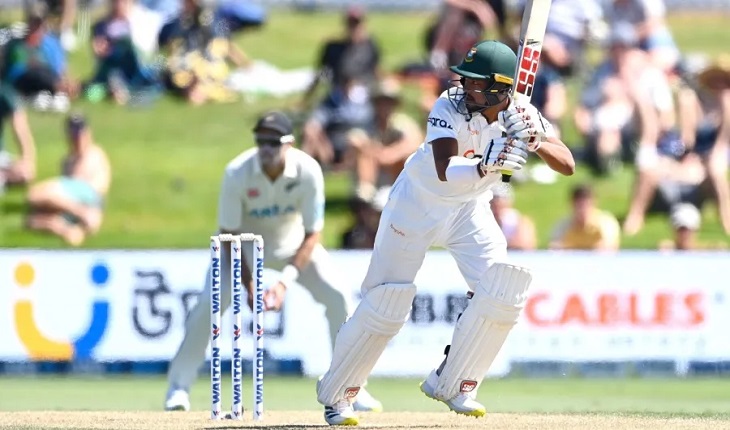 For the second consecutive day, Bangladesh enjoyed a rare dominance over New Zealand, keeping them aloft over the hosts in the first Test at Bay Oval in Mount Maunganuie today.

After bowlers bowled New Zealand out for 328 in the first innings, Joy led the charge with an unbeaten 70 as Bangladesh reached 175-2 at stumps on day two. Bangladesh is now trailing by 153 runs.

Resuming the day on 258-5, New Zealand could add just 70 runs to their overnight total to be out on 328. Most of the runs came through overnight unbeaten batter Henry Nicholls, who went on to score 75 after beginning the day at 32.

No other batters however could give Nicholls a support as Bangladesh bowlers came up all guns blazing.

Off spinner Mehidy Hasan Miraz gave the hosts batters some torrid period on this day. He claimed three lower order batters to finish at 3086.

But skipper Mominul Haque grabbed the key wicket of Nicholls. Mominul on day one also took the wicket of Devon Conway, who top-scored for the side with 122. Mominul finally ended with 2-6.

Pacer Shoriful Isalm added one wicket to his overnight two to take 3-69, which is his career best bowling.

After New Zealand were bowled out, Bangladesh openers gave the side a solid start with Joy and Shadman Islam patiently dealing the new balls to keep them unscathed.

Neil Wagner gave the side a breakthrough, removing Shadman with a return catch for 22.

Bangladesh are used to experience collapse after a good start on foreign soil but this time it was different Bangladesh, contrary to popular belief. Joy and Shanto kept Bangladesh rolling and utilized the foundation well by sharing 104-run for the second wicket stand, much to the frustration of the New Zealand bowlers.

Wagner again broke through, this time with the wicket of Shanto who struck seven fours and one sixe for his 64 off 109.

Joy, who so far played 211 balls for his unbeaten 70, clobbered seven fours. Before the bails were drawn, skipper Mominul Haque was batting on 8 alongside him.

Wagner took all the two fallen wickets for 27 runs.