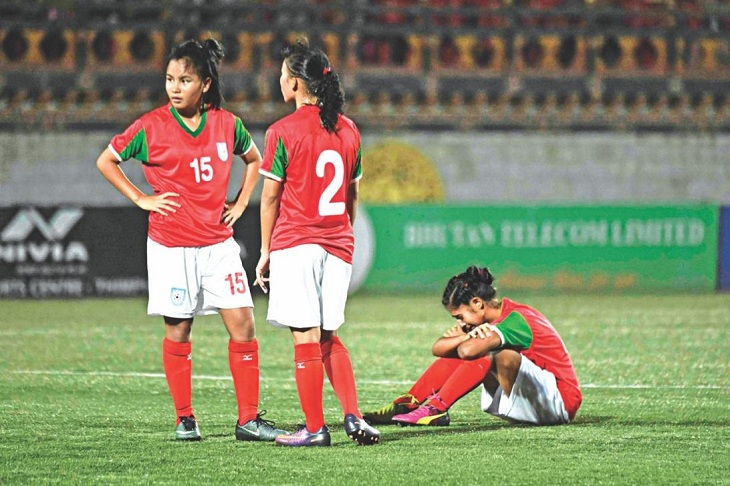 Bangladesh’s hope of clinch the SAFF U-15 Women’s championship title vanished into blue as they lost to India by 5-3 goals in penalty shootout in the keenly contested final held on Tuesday at Changlimithang Stadium in Thimphu, Bhutan.

With no goals coming in normal time, the match moved to a penalty shootout. India won the shootout 5-3 after Bangladesh fluffed its first penalty.

The two teams had met earlier in the final group stage game, with that match ending in a 1-1 draw.

In the regulation time, both the teams got several scoring chances but failed to convert any of those in to a goal. Earlier, Bangladesh got off to a winning start as they blanked host Bhutan by 2-0 goals and defeated Nepal by 2-1 goals.

Bangladesh earned a fighting 1-1 goal draw against strong India in their third and last match.

On the other hand, India crushed Nepal by 4-1 goals in their opening match and dumped host Bhutan by 10-1 goals in the second match.

Bangladesh won all their three matches to become champions in the inaugural edition but lost to India with a solitary goal in the final of the last edition held in Bhutan.