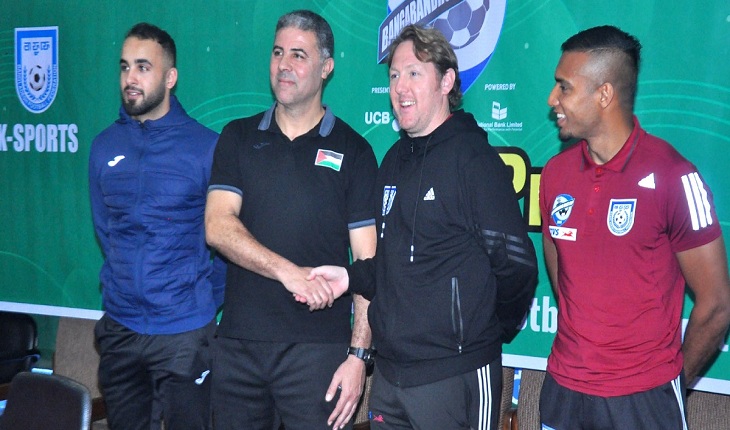 The six-nation Bangabandhu International Gold Cup football, organized on the occasion of the birth centenary of Father of the Nation Bangabandhu Sheikh Mujibur Rahman, begins here on Wednesday.

Defending champions Palestine will take on hosts Bangladesh in the opening match of the first international sports meet on the eve of the ‘Mujib Borsho’ at the country’s premier sports venue -- Bangabandhu National Stadium -- at 5pm.

Law Minister M Anisul Huq will be the chief guest at the inaugural ceremony. State Minister for Youth and Sports Zahid Ahsan Russel will be present as a special guest.

State-owned Bangladesh Television and Rtv will telecast the match live while Bangladesh Betar will broadcast the running commentary.

Hosts Bangladesh, placed in Group A with Palestine and Sri Lanka, will take on Sri Lanka on January 19 at the same time and same venue while Group B team comprises three African countries -- Burundi, Mauritius and Seychelles.

Burundi will play Mauritius in the first Group B match on January 16 at 5pm at Bangabandhu National Stadium.

The title-deciding final will be held on January 25, also at 5pm at the same venue.

Ahead of the tough opening match, Bangladesh Head Coach Jamie Day on Tuesday said they can avoid the defeat against upper-ranked Palestine if they perform the way they did against India and Qatar in the FIFA, AFC joint qualifiers.

“We played well against India and Qatar. If we do the same against Palestine, then we’ll be able to avoid the defeat. But if we repeat the mistakes what we do in the 2nd half against Oman, then Palestine will get chances to score,” Jamie said in a pre-match press conference at Bangladesh Football Federation (BFF) office.

“Palestine are the strong side and they have young legs as well as national players. But we’re looking forward to tomorrow’s match with confidence. We know we can play well. Scoring is the main issue. But we have to take our chances,” the head coach added.

About the preparations, Jamie said they have trained well. Striker Ziban and defender Badsha will miss the tournament as they are sick, but other players are fine.

Bangladesh captain Jamal Bhuiyan said, “Some of our players failed to give their best in the last South Asian Games in Nepal. It’s a good opportunity for them to rectify those mistakes as well as to prove their worth.”

As the team will miss the services of Ziban and Badsha, he said many new players come to the squad and they can do well.

Bangladesh suffered a blow just before the meet as their two key players centre back Tutul Hossain Badsha and forward Nabib Newaz Ziban were ruled out of the tournament due to fever.
Defender Monjurur Rahman has been included in place of Badsha while Saif SC midfielder Foysal Ahmed Fahim is the other replacement.

“Last year we got the title, and now we came again to retain the title. Other teams are also good, all of them have the same chances of winning,” he said.

“We have 10 best young players in the squad that played in our local leagues. We picked up seven players from Palestine Under-23 team and seven others from FIFA World Cup Qualifiers squad. Those local players will play their maiden international match here. We believe they’ll do well,” Makram added.

Bangladesh never clinched title of the Bangabandhu Gold Cup. They finished runners-up in 2015 conceding 3-2 goals defeat against Malaysia in the final, which is their highest achievement.

On the other hand, Palestine emerged unbeaten champions in the last edition of the meet in 2018 beating Tajikistan by 4-3 goals in the tie-breaker.

Ahead of the tournament, BFF President Kazi Mohammad Salahuddin at a function on Sunday announced a bonus US $100,000 if the Bangladesh team clinch the Bangabandhu Gold Cup title. If they end up as runners-up, Bangladesh team will get US $50,000.

Stay alert against misuse of religion

Expats urged to contribute through remittance