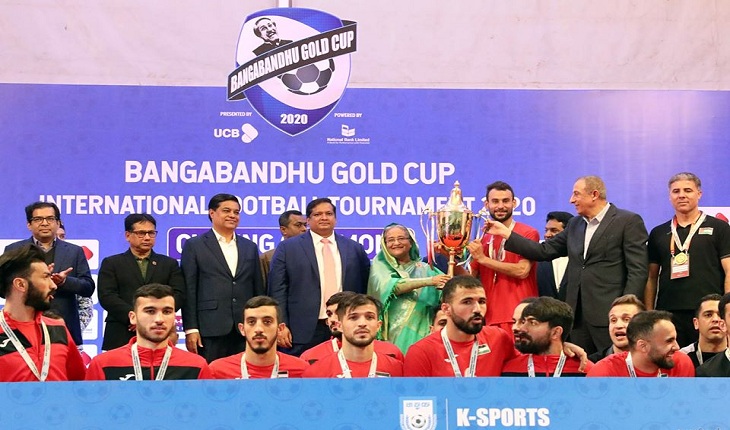 Palestine retained the Bangabandhu Gold Cup title beating Burundi by 3-1 goals in the final of the 6th edition of the meet at Bangabandhu National Stadium in Dhaka on Saturday.

The West Asian team, Palestine, emerged unbeaten champions of the meet for the second time in row. They reached the final beating lowly Seychelles by 1-0 goal in the first semifinal, and Bangladesh and Sri Lanka by the same 2-0 goals margin in the Group A games.

Palestine emerged the unbeaten champions in the last edition of the meet in 2018 beating Tajikistan by 4-3 goals in the final in tie-breaker.

Burundi, who took part in the Bangabandhu Gold Cup for the first time, beat hosts Bangladesh by 3-0 goals in the 2nd semifinal. The East African team also emerged group champions crushing Mauritius by 4-1 goals and Seychelles by 3-1 goals in their Group B matches.

Prime Minister Sheikh Hasina distributed the prizes among the champion and runners-up teams as the chief guest.

She thanked the tournament organising committee for arranging the soccer meet on the eve of the ‘Mujib Borsho’. She also greeted the champions, runners-up and all the participating teams.

Burundi forward Nshimirimana Jospin, who scored seven goals, including two hat-tricks, in the meet won both the Golden Boot as the top goal scorer and Golden Ball as the most valuable player.

In the final, Palestine scored three early goals in the first half. Forward Salem opened the account from inside the box utilising a short pass from playmaker Mohamed Darwish in the 3rd minute (1-0).

Just after six minutes, Maraaba doubled the margin in the second chance after Burundi goalkeeper Ndizeye Fales denied a direct corner kick by Mohmoud Abu Warda in the 10th minute (2-0).

In the 26th minute, forward Kharoub sealed the fate of the game converting the goal correctly while his teammate Salem missed the first chance, off a pass from Darwish (3-0).

In the 60th minute, defender Ndikumana Asman reduced the margin for Burundi scoring from inside the box, off a pass from another defender Ngabonziza Blanchard.

After the half-time, Burundi got just two close chances -- forward Gasongo Benjamin wasted the first chance while Jospin sent to him the ball in the 54th minute. But defender Asman made no mistake to score the lone goal for his side utilising a pass from another defender Ngabonziza Blanchard in the 60th minute (3-1).

The Bangabandhu International Gold Cup Football is one the prestigious soccer meets organised by BFF from 1996. The federation is paying tributes to Father of the Nation Bangabandhu Sheikh Mujibur Rahman through the tournament.

No book festival this year, textbooks to be reached students’ hand

Gazette notification on using ‘Bir’ before names of FFs

Shutdown of educational institutions to be extended