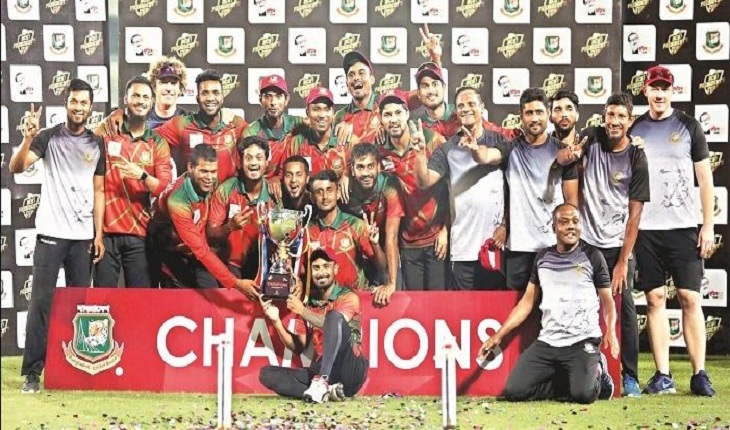 Liton and Imrul added 63 runs in order to lay the foundation for the third wicket. For the Nazmul XI, Nasum Ahmed chose 2-48, but that barely looked adequate as Liton dominated the show with his masterful batting display.

As the duo strangled Nazmul XI in a field that was at least conducive to batting, Sumon was complemented by his new ball bowling partner Rubel Hossain's 2-27.

For the Nazmul XI, who was first sent to bat, Ebadot Hossain, Captain Mahmudullah Riyadh and Mehidy Miraz scalped one wicket apiece to add more agony.

However, Irfan Shukkur stood tall in batting despite the offensive downfall of his colleagues by hitting a scintillating 75 out of 77 that included eight fours and two sixes.

The batting of Shukkur showed the pitch had no demons, at least. But even before passing 70 rounds in the most critical game, Nazmul XI lost half of the batting line.

Mahmudullah XI made three changes to their side ahead of the most critical game of the tournament, with Mominul Haque, Sumon Khan and Aminul Islam Biplob replacing Naim Sheikh, Abu Haider Rony and Rakibul Hasan.

On the other side, as Saif Hasan and Nayeem Hassan arrived in the place of Parvez Hossain Emon and Rishad Ahmed, Nazmul XI have made two changes.

Earlier, Nazmul XI won both their games against Mahmudullah XI in the group stage.

Player of the Match - Sumon Khan

Player of the Tournament - Mushfiqur Rahim

Batsman of the Tournament - Irfan Shukkur

Bowler of the Tournament - Rubel Hossain