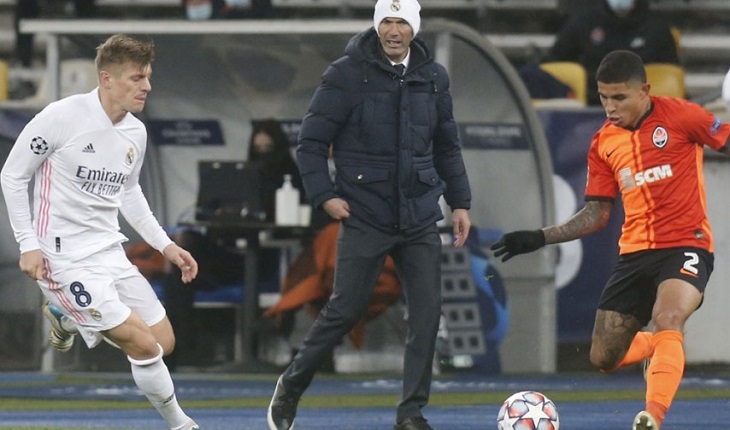 Real Madrid lost to host Shakhtar Donetsk in the second leg after the first leg of the UEFA Champions League. At this rate, a record 13-time European champions are now at risk of advancing to the last 16.

Zinedine Zidane's side lost 2-0 to Shakhtar Donetsk at the NSC Olympiakisi Stadium on Tuesday (December 1st).

Earlier, the Spaniards lost 3-2 in the first leg. Castro did not get 13 players due to Corona in that match. In fact, Shakhtar broke the sweat of Real with the under-23 team. This time, however, Shakhtar came down with a relatively strong team. The result of the match was in their favor.

Real got a chance at the beginning of the match. Marco Asensio took a shot by controlling French striker Karim Benzema's ball. The shot hit the post and increased Real's frustration. Asensio and Benzema got a few more chances in the first half, but to no avail.

However, the same phase continued in the second half. Nacho Fernandez's weak header from Benzema's cross did not score. Real went ahead in the 57th minute of the match. Because of Real's french left-back Farlan Mendy and center-back Rafael Varane misunderstanding, Brazilian forward Dentinio scored goal from a pass by Shakhtar midfielder Victor Kovalenko. Shakhtar's Israeli midfielder Manor Solomon doubled the lead in the 82 minute with a perfect shot from the right foot.

Real could not repay the two goals later in the rest of the match. In the end, after losing this 2-0 goal, it became difficult for Real Madrid to go to the second round.

In order to advance to the second round, they have to play their last match in the group stage with an 'unwritten final' for the four teams. Because any team is sure to say goodbye if the legs slip.