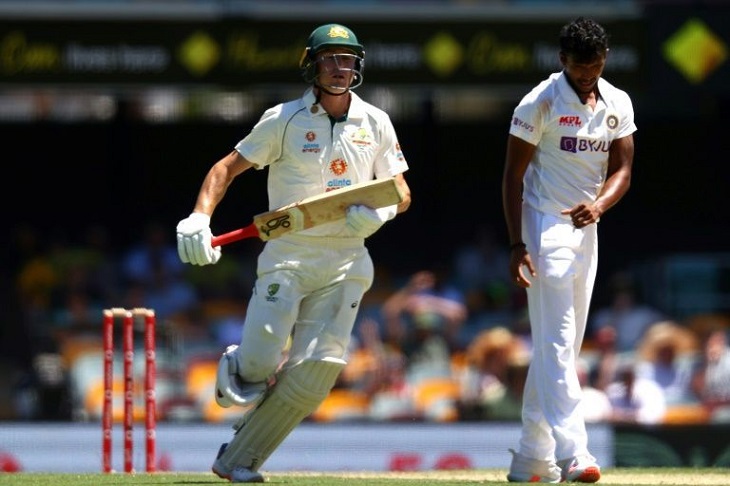 Australia's Marnus Labuschagne survived two dropped catches to help the home side reach 154 for three at tea on the first day of the deciding Test against injury-riddled India at the Gabba in Brisbane on Friday.

Labuschagne was unbeaten on 73 alongside Matthew Wade (27) after Australian captain Tim Paine won the toss and chose to bat on a benign Gabba wicket.

But Labuschagne rode his luck in the session, Indian captain Ajinkya Rahane dropping a simple chance when he was on 37 and Cheteshwar Pujara grassing a much harder one on 48.

Australia had started the session at 65 for two, with Labuschagne and Steve Smith at the crease after openers David Warner and Marcus Harris both fell cheaply.

But 20 minutes after the resumption India were celebrating the key wicket of Smith, caught at short midwicket by Rohit Sharma to give off-spinner Washington Sundar his first Test scalp.

With the four-Test series locked at 1-1, India went into the final game as massive underdogs following the loss of four players from the third game, which finished on Monday in Sydney.

T. Natarajan and Sundar made their debuts while there were also recalls for Mayank Agarwal and Shardul Thakur.

The entire Indian bowling attack has only nine caps between them, with Mohammad Siraj, playing his third Test, the most experienced.

By contrast, Australia only made one change, with Harris coming in for Will Pucovski, who injured his shoulder while fielding in Sydney.

Yet India got away to the perfect start when Warner fell on the last ball of the first over, edging Siraj to second slip, where Sharma took a superb catch diving to his right.

Natarajan shared the new ball with Siraj and kept the pressure on with some tight bowling, his opening spell of six overs going for just eight runs.

The pressure eventually told when Thakur, playing just his second Test, struck with his first ball, Harris chipping a simple catch to Sundar at square leg to leave Australia 17 for two.

But Smith and Labuschagne, Australia's saviours in so many recent matches, once again steadied the rocking ship.

Smith, who roared back to form with a century in Sydney, was impressive from the start, while Labuschagne started slowly but looked more and more comfortable the longer he stayed at the crease.

The pair continued on their way after lunch but with the score on 87, Smith clipped a ball from Sundar to Sharma to be on his way for 36.

Australia should have lost Labuschagne in the next over when he edged Saini to gully, but the normally reliable Rahane dropped a simple chance.

To make matters worse, Saini appeared to injure his groin making the delivery and left the field. He did not return in the session.