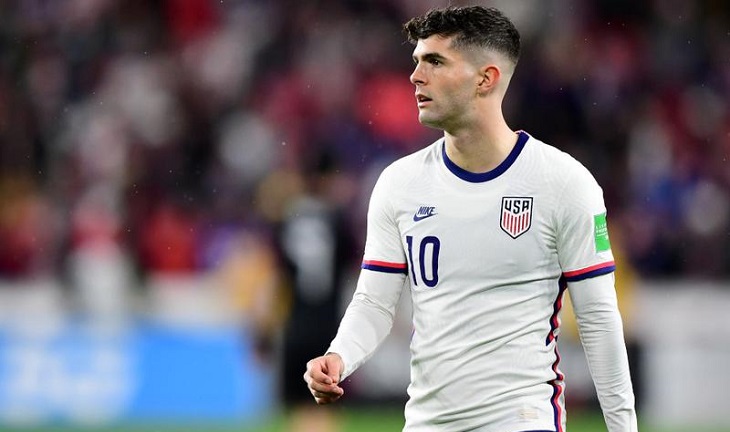 United States coach Gregg Berhalter says he will make a "judgement call" over whether or not to start Christian Pulisic in Tuesday's 2022 World Cup qualifier against Jamaica.

Chelsea star Pulisic made a dramatic return to international duty last Friday after a two-month injury absence, scoring the crucial opening goal after coming on as a substitute in a 2-0 victory over Mexico.

That win left the United States on top of the standings in the final round of qualifiers for Central America, North America and the Caribbean (CONCACAF).

Three more points against Jamaica on Tuesday would put Berhalter's side firmly on course for a place at the Qatar finals heading into the final stretch of qualifying fixtures.

While Pulisic's introduction against Mexico changed the game, Berhalter says he is yet to decide if the 23-year-old forward, who has only just returned to fitness after a niggling ankle injury, will start on Tuesday.

"It comes down to a judgement call, and how we feel he can best affect the opponent," Berhalter said Monday when asked about Pulisic's status.

"We could have started him against Mexico but we didn't want to because we knew he couldn't go the full 90 minutes. It's going to be a similar type of question that we have to ask for this game.

"If we do start him how much time can he play and what does that look like for the game and getting the result?

"It's still up in the air. He trained yesterday and he'll train today, so we'll see."

Berhalter will need to make at least two changes to his starting line-up, with Weston McKennie and Miles Robinson both suspended.

Berhalter meanwhile has been busy refocusing his squad on the task in hand against Jamaica after the euphoria of Friday's win over arch rivals Mexico in Cincinnati.

"For us, our big picture is qualifying for the World Cup," Berhalter said. "The Mexico game put us closer, and the Jamaica game can put us even closer. For us it's a massive game.

"After the team meeting yesterday I said: 'As soon as we walk out of this room, Mexico's in the rear-view mirror.' Now we have to get ready for Jamaica."

Jamaica are in sixth place in the CONCACAF standings with six points from seven games, five points adrift of the qualifying places.

The Reggae Boyz drew 1-1 with El Salvador on Friday, when only a 90th-minute Alex Roldan goal denied the Jamaicans a precious away win.

Berhalter is wary of the threat posed by Jamaica's in-form West Ham forward Michael Antonio and Aston Villa winger Leon Bailey, but is confident the US can also cause problems for the hosts.

"It's also a matter of what we can do," Berhalter said. "How can we pull them apart and get behind them? We want to be aggressive in this game and pull them out of position to take advantage of the spaces that open up for us."