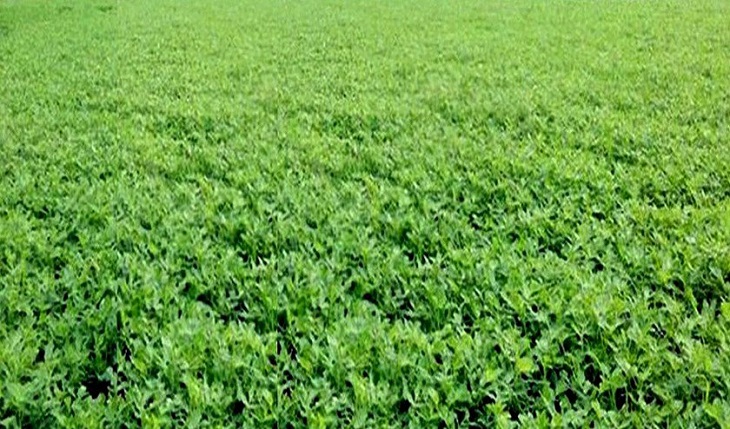 Tender plants of groundnut are growing superbly as sowing of seeds is nearing completion during the current Rabi season in Rangpur agriculture region.

Officials of the Department of Agricultural Extension (DAE) said farmers are expanding groundnut cultivation every year after reaping more profits than many other crops in recent years following increasing demand of the crop.

A target of producing 11,688 tonnes of groundnut from 6,015 hectares of land has been fixed for all five districts in Rangpur agriculture region during the current Rabi season.

"Farmers have so far cultivated groundnut on 5,475 hectares of land, 91.02 percent of the targeted land area, as sowing of seeds will continue till the next month," said Additional Director of the DAE's Rangpur region Agriculturist Md. Tauhidul Ikbal.

Because of conducting motivational activities by the DAE and other organisations, farmers are showing interest in cultivating high yielding varieties of groundnut evolved by Bangladesh Agriculture Research Institute (BARI).

"With the increasing demand of groundnut in the boosting food industry sector, farmers are expanding groundnut cultivation on main lands and riverine char areas as well every year," Ikbal said.

Farmers are generally earning around Taka 40,000 by producing up to 30 mounds of high yielding varieties of groundnut per acre of land, spending about Taka 20,000 as farming costs per acre.

Groundnut is cultivated three times round the year during the Rabi, Kharif- 1 and Kharif-2 seasons.

"Around 7,000 farmers, mostly living in char areas, have achieved self-reliance by cultivating groundnut on char lands across the region improving their living standard in the last 13 years," Rashid added.

Farmers Lokman Hossain, Saiful Islam and Saiduzzaman of Char Biswa Nath village under Kawnia upazila of the district said they have changed fortune through farming groundnut on char lands over the years to lead solvent life.

Farmer Abdur Rahman of Char Ghoneshyam village in Sadar upazila of Kurigram district said he has cultivated groundnut on one acre of char land spending Taka 20,000 this year.

Groundnut trader Mokhlesur Rahman at Rangpur City Bazar said farmers are getting a lucrative price of their newly harvested groundnut cultivated during the Kharif-2 season between Taka 3,200 and 3,500 per mound (every 40 kilogram) in wholesale markets.

"We are currently selling groundnut to the retailers at rates between Taka 3,500 and Taka 3,800 per mound," he added.