Meek Tigers dismissed for 73 against Australia 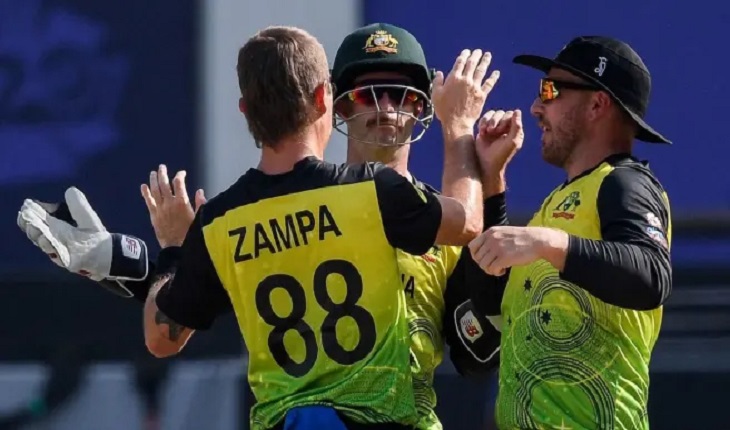 Bangladesh put yet another miserable batting show to be bowled out for 73 in 15 overs against Australia in their last game of the Super 12 phase of ongoing Twenty20 World Cup today at Dubai in UAE.

Leg-spinner Adam Zampa was the wrecker-in-chief with 5-19, his best bowling and second best for Australia in this format. He was ably supported by fast bowlers Mitchell Starc and Josh Hazzlewood who claimed two wickets apiece.

This was Bangladesh’s second lowest total in the T20 World Cup with the lowest 70 came against New Zealand in Kolkata in the 2016 edition. This was also Mahmudullah and his troops’ second total below 100 in this tournament in a row, having shot out for 84 against South Africa in the previous match.

After being sent to bat first, Bangladesh lost the wicket in the first over when Liton Das was bowled out by an express delivery of Mitchell Starc.

But Bangladesh appeared to recover from the jolt with Naim and Soumya Sarkar finding a couple of boundaries in an otherwise pretty good batting deck.

But the rot began then with Soumya dragging one of Josh Hazzlewood onto his wicket and Mushfiqur being trapped leg-before after trying to flick a delivery of Glenn Maxwell.

The Tigers were left to 10-3 in third overs, indicating that the second consecutive total below 100 was on the cards.

Adam Zampa then appeared on the stage, leaving Bangladesh in further trouble with his googly and traditional leg-break.

Amid Zampa’s carnage, Shamim Patwari showed a brief show of his big hitting prowess but couldn’t continue as he also dug his own graveyard by playing a wretched shot.

Soon after captain Mahmudullah was dismissed by Starc and his dismissal brought an end to Bangladesh’s slim hope to propel the score past 100.

However thelower order saved Bangladesh from being bowled out for their lowest total in the Twenty20 World by 3 runs margin even though Zampa finished with his first five-wicket haul in the T20 International format and only fourth for Australia.

France accuses Australia, US of 'lying' in escalating crisis over submarines