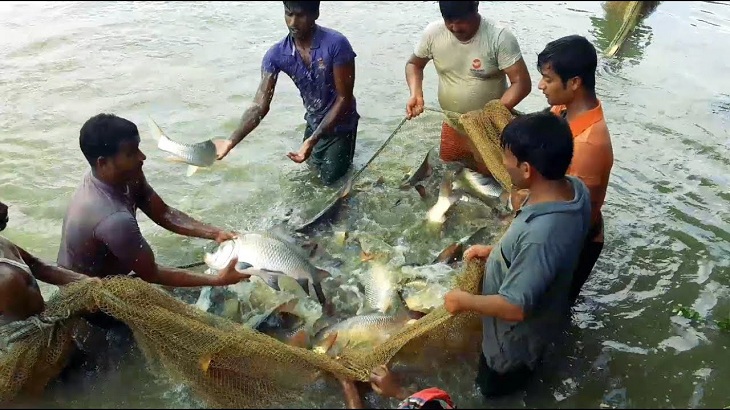 Fish production in both closed and open water-bodies has been enhanced by more than 1.78 lakh tonnes in all eight districts under Rajshahi division in the last four years benefitting people of the region in many ways.

In last 2014-15 financial year, fish production was around 3.98 lakh tonnes whereas the production was stood to 4.76 lakh tonnes in 2018-19 fiscal, said Hassan Ferdous Sarker, divisional deputy director of the Department of Fisheries (DoF), here Thursday.

He said the region has also attained the success of 71,443 tonnes of surplus fish production in comparison to the existing demands. The farmers have harvested 4.76 lakh tonnes of fish from 4.03 lakh hectares of different categories of water-bodies in last fiscal against the demand of 4.04 lakh tonnes of around 1.92 crore people in the division.

Hassan Sarker mentioned that the success has been attained due to the adoption of multidimensional development and extension programs including promotion of modern technologies.

There are around 1.60 lakh fish farmer, 1.40 lakh fishermen and 6,712 fingerling traders in the division at present. The region has also attained significant success in fish spawn and fish fingerling production which are also surplus than the existing demand.

Fish farming is making many people financially solvent along with boosting their social dignity and contributing to meeting the demand for animal protein of the region besides different other parts of the country. In order to boost fish production in the country’s internal water-bodies, stock of around 1.04 lakh metric tonnes of fish fingerlings has been arranged in different water-bodies at a cost of around Taka 15.62 crore benefiting 6.84 lakh fish farmers.

Besides, beel nursery on 1,370.06 hectares of water-bodies has been installed at a cost of around Taka 2.80 crore benefitting 58,984 fish-growers contributing a lot to boosting carp fishes in internal water bodies. Amzad Hossain, a fish farmer of Keshorehat village in Mohanpur upazila, alone produced 30.25 tonnes of fish worth around Taka 44.25 lakh making a net profit of Taka 15 lakh in 2018.

Through ensuring quality, he collects eggs from government hatchery and rivers and breeds fishes from the eggs by himself. At the initial stage, he got training from Upazila Fisheries Office on fish farming. He said several hundreds of new large ponds have been excavated where fishes are being cultivated commercially.

Carp varieties like rui, katla, mrigel, silver carp and grass carp are the most popular. A carp fish generally weighing 2.5 kg to 5.5 kg is sold at Tk 300 to Tk 600 per kg.

The idea of sending live fish to Dhaka was first introduced by fish trader Jamal Uddin of Krishnapur village under Tanore upazila in 2009. Those live fishes were sold at a high price in Dhaka kitchen markets.

Alok Kumar Shaha, District Fisheries Officer, said Rajshahi was the pioneer in achieving self-sufficiency in fish production. Many people have improved their financial condition by fish farming on a large scale.