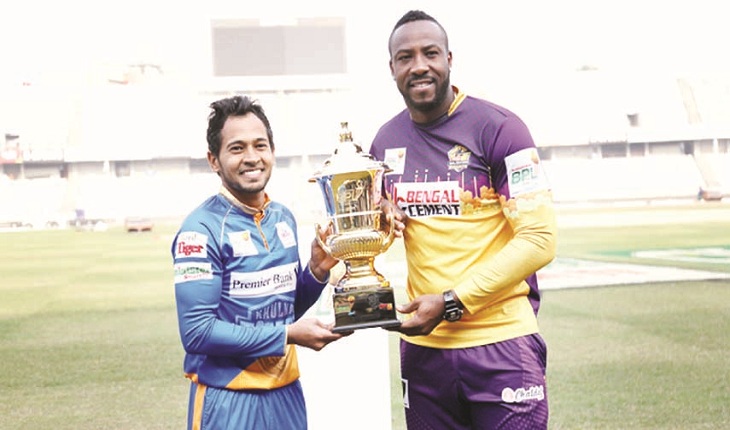 The seventh edition of the Bangladesh Premier League (BPL), a special edition that is dedicated to the Father of the Nation Bangabandhu Sheikh Mujibur Rahman to celebrate his birth centenary, will see a new champions when Rajshahi Royals and Khulna Tigers would clash for the coveted trophy at the Sher-e-Bangla National Cricket Stadium on Friday.

The match starts at 7 PM.

In its previous six editions, the BPL went through a numerous changes from the change of ownership to the tournament structures but Dhaka franchisees lifted the trophy for highest three times-twice in the name Dhaka Gladiators and once as Dhaka Dynamites. Cumilla Victorians, the reigning champions, won the title twice while Rangpur Riders won it once.
This edition however got two new teams who never won the trophy though Rajshahi in the name of Rajshahi Kings played the final in 2016-2017 season.

Unarguably these two teams-Rajshahi Royals and Khulna Tigers were the most consistent teams in the group phase as both of them won eight matches out of 12. Khulna however edged Rajshahi by net-run-rate to top the table and also got the better of Rajshahi by 27 runs in the first Qualifier to seal the final straightway.

Rajshahi then rode on captain Andre Russell’s unbelievable 22 ball-54 runs not out to snatch a two-wicket victory against Chattogram Challengers from the jaws of the defeat in the second Qualifier.

In the group phase, they faced off each other twice-Khulna won the first leg match by five wickets while Rajshahi took the revenge, beating them by seven wickets in the second leg.

It’s the first time that Mushfiqur Rahim, the longest serving captain of the Bangladesh, is playing his first BPL final.

Not only that he is playing his first final but also he leads the side throughout the whole tournament for the first time in BPL history. In previous six editions, somehow for some reasons he gave up the captaincy halfway through the tournament. “It’s his first final in the tournament. He has been leading the side very well with on and off the field. He knows it’s his best chance to win the trophy and said he is desperate to win it,” Khulna team director Khaled Mahmud Sujon said.

Mushfiqur so far remains the highest scorer in this tournament with 470 runs from 13 matches, striking four half-centuries, two of those were 90 plus knocks. His teammate Rilee Rossouw scored 458 runs to sit behind him.

They have the bowling firepower in Mohammad Amir who in first Qualifier against Rajshahi recorded best (6-17) BPL bowling figures. Alongside him there is Robbie Frylinck and others.

But Rajshahi also has the resources in their batting and bowling line up. Their captain Andre Russell has the reputation of snatching the victory whatever the asking run rate is, as evidenced in his marauding knock against Chattogram in the second Qualifier. Shoaib Malik is the third highest run-getter with 446 runs while they have the bowlers like Mohammad Irfan. Russell and Malik too are handy with bowling.

”Earlier we have seen with Amir what he can do so we are not going to take anything for granted. We have to make sure to pace ourselves well and that’s where we went wrong (in the previous game). I will go with my gut feeling,” Russell said.