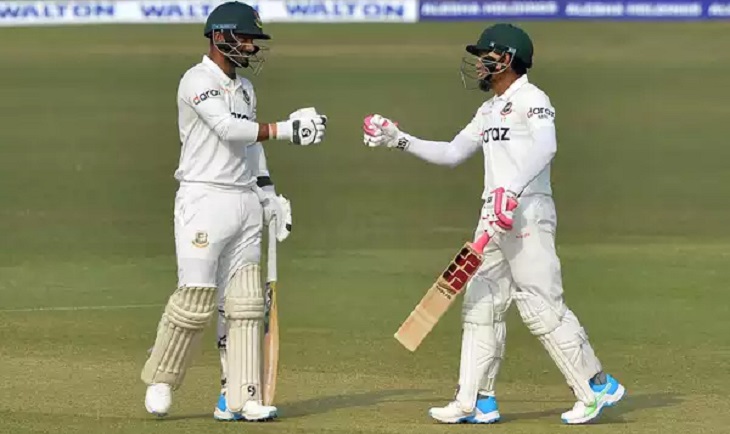 Liton Das and Mushfiqur Rahim hit their respective half-century as Bangladesh recovered from early trouble to reach 171-4 at tea on the first day of the opening Test against Pakistan today at Zahur Ahmed Chowhdury Stadium.

Bangladesh were reduced to 69-4 at the first interval of the day but the duo kept the side unscathed in the whole post lunch session to put the pressure on Pakistan bowlers.

At the second break of the day, Liton was batting on 62, hitting seven fours and one six from 136 balls with Mushfiqur on 55 off 122, laced with eight boundaries.

Saif Hasan hit fast bowler Hasan Ali a couple of boundaries in the second over to hint a good start for Bangladesh after captain Mominul Haque opted to bat first.

His opening partner Shadman Islam struggled against Afridi who moved the ball admirably but Saif grew with confidence, driving the left arm pacer through mid-off for four.

Afridi broke through in the immediate next delivery when Saif Hasan fended a short delivery to short leg for 14.

Shadman also fell for 14, as Hasan Ali had him leg-before after leaking runs in his opening spell.

Offspinner Sajid Khan gave the side big breakthrough when he reviewed successfully to dismiss captain Mominul Haque for 6.

Najmul Hossain Shanto then followed him, giving a straight catch to point for 14 as Bangladesh crumbled under pressure with 49-4.

Experienced Mushfiqur Rahim and Liton Das saw off the next one hour, dealing with the pumped-up Pakistan bowlers patiently.

The wicket indeed turned out to be flat after the first hour when the moisture played all trick and the Pakistan pacers were smart to use it.

As the pitch became easier, Liton and Mushfiqur unleashed some brilliant shot from the repertoire to make the Pakistani bowlers disarray.

Liton became the first one to bring up his half-century off 95 balls when he chopped left arm spinner Nauman Ali's short delivery past backward point for boundary.

It was his 10th half-century in 26th Test and back-to-back after his 95 against Zimbabwe in the last Test. But he was in such a poor form in T20 cricket that almost everyone forgot his Test record.

Mushfiqur who initially struggled brought up his 24th half-century with a back-to-back boundary against Hasan Ali off 108 balls.