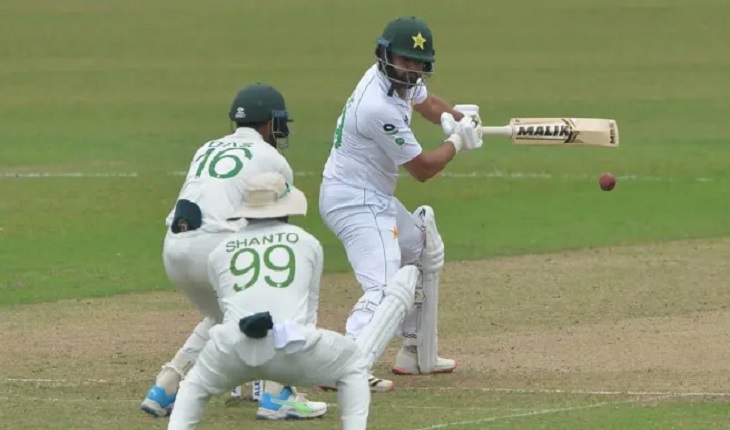 At the second break of the day, Babar was batting on 60 with Azhar Ali, who struggled a bit on 36.

Left-arm spinner Taijul bowled brilliantly in the morning session to put Bangladesh on top when the visitors seemingly headed towards a big score.

Openers Abid Ali and Abdullah Shafique brought up a 50-run partnership in the first hour as the captain Babar Azam elected to bat first after winning the toss.

Abid Ali struck the first three boundaries of the day while Shafique grew with confidence, hitting Taijul a big six.

His straight delivery rattled the stump of Shafique on 25, bringing Bangladesh back into the contest.

But the big scalp was Abid Ali who showed a steely resolve in the crease to make the bowling disarray .

Following his 133 and 91 in the first Test, Abid Ali looked all set for another big score but fell for 39 as Taijul again struck with a straight delivery that didn’t turn as much as he expected.

Left-arm spinner Shakib Al Hasan who returned to the side after recovering from his hamstring injury gave the control, allowing Taijul to rule Pakistani batters.

Babar and Azhar survived several tricky moments at the outset of their innings, particularly against Taijul.

However, Babar took the initiative to break the shackle and he successfully did it to tilt the pressure on Bangladesh again.

The hosts could have swung the momentum had Khaled Ahmed not put down a tough chance, offered by Babar on 39 off Shakib Al Hasan’s bowling.

That was the only scar in Babar’s near perfect innings.

Azhar Ali meanwhile looked shaky and was once hit on his helmet by a bouncer of pacer Ebadot Hossain. To his luck, it didn’t cause much damage as he looked okay and continued to bat.

Taijul remained the most successful bowler for Bangladesh till now with 2-49.