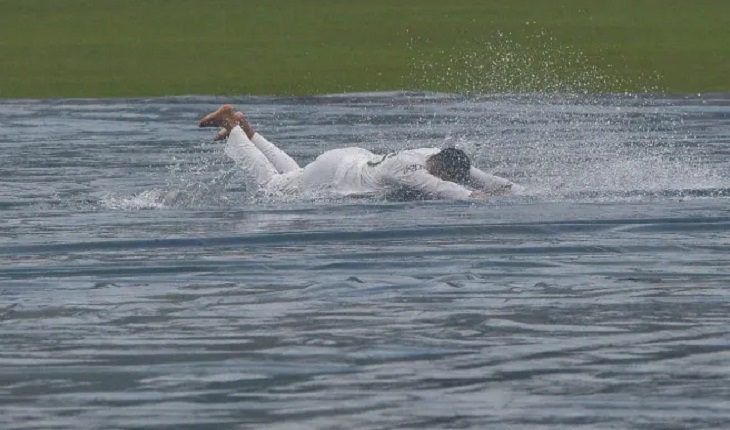 Persistent rain, caused by the cyclone ‘Jawad’ continued to play spoilsport of the second and final Test between Bangladesh and Pakistan, forcing an abandonment of the third day game also at Sher-e-Bangla National Cricket Stadium today.

The announcement 1.30 hours came after the scheduled lunch session as there was no sign of stopping the rain, which has been pouring relentlessly since last night.

The third session of the first day was lost to rain and bad light and only 6.2 overs out of 98 overs were possible on day two.

With more rain or thunderstorms being predicted in many parts of the country in the next 24 hours, a draw looks like the only possible result.

Pakistan have been in dominant position now, reaching 188-2 in 63.2 overs with captain Babar Azam batting on 71 and Azhar Ali on 52 after putting on 118-run partnership for the unbroken third wicket stand.

Earlier on day one Pakistan openers made a rapid start, bringing up 50-run partnership in less than an hour in the first session of first day following Babar Azam’s decision to bat first.

But left-arm spinner Taijul Islam (2-49) removed both of them, leaving Pakistan at troublesome 70-2 and brought the side back into the contention,

Babar and Azhar steadied the inning thens and put Pakistan on top before the inclement weather halted the proceedings of the majority of the game.

Pakistan won the first Test by eight wickets and led the two-match series 1-0.